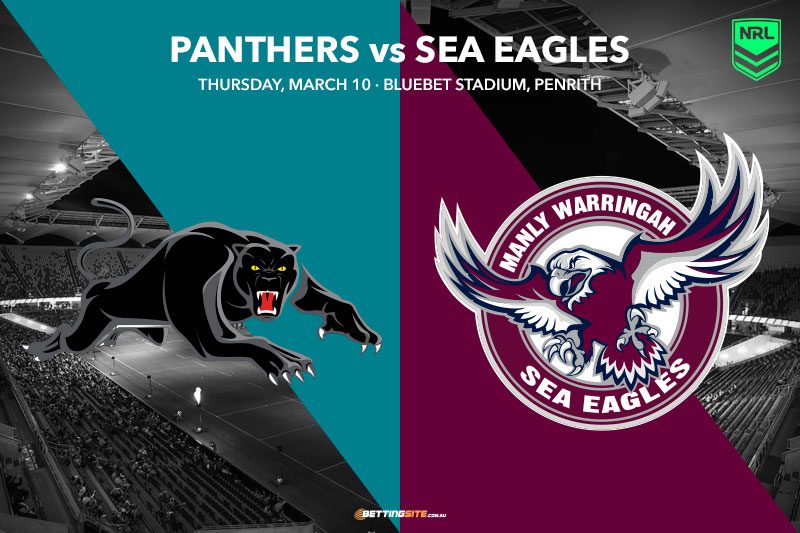 The NRL will kick off the 2022 season with a first-round blockbuster between the Penrith Panthers and Manly Warringah Sea Eagles at BlueBet Stadium in Penrith. After the 2021 season finished in Queensland due to the COVID-19 pandemic, it will be the first time in nine months Panthers fans will be able to watch their team live and bask in the glow of the club’s third premiership. Penrith head into the year with the big target on their chest as the reigning premiers and will no doubt get the best shot of all their rivals, and this week it will be the Tom Trbojevic-inspired Sea Eagles who get the first chance to take on the champions.

Penrith were as short as $1.50 with online bookmakers when the betting market opened for this match, and they fluctuated as far as $2.05, but they’ve settled into a $2 outsider. Nathan Cleary’s injury withdrawal, along with Matt Burton no longer being at the club, has swayed punters dramatically. The line is just +1.5 so far and it shouldn’t change unless there is more injury drama in the lead-up, but without Cleary, a field-goal margin doesn’t feel like it is on the cards for the home team.

Expect this Panthers team to play similarly to how they did in the run towards the premiership, rather than getting into a gun fight on a field that has copped torrential rain in the past fortnight. It brings the under 42.5 total points for the match right into the frame. Brian To’o is the shortest-priced Panther at $9 to score the first try, and he should be in everyone’s betting slip for this game.

Manly have won just four of their last 15 round-one games, so is that stat a prediction of what will happen, or will it be merely a record of the past? Much like the line for Penrith not making sense, taking the Sea Eagles in this game either at the line or head-to-head could be hard to do if you’re a believer in trends.

The swing into favouritism has come purely off Tom Trbojevic ($7.50 to be the first tryscorer) being the reigning Dally M Medallist, but quite often players who win that award find it hard to hit the ground running immediately the following season. With penalties back for infringement inside a team’s defensive 40-metre zone, it will be interesting to see the impact of Trbojevic, who benefitted unbelievably from a game with fewer stoppages.

The Sea Eagles typically blew teams off the park in 2021, but with some more stoppages and trying to defeat a team that is a defensive juggernaut, the 13+ margin is off the cards for this game. They will also be without their first-string back row of Haumole Olakau’atu and Josh Schuster, which will leave their forward rotation a little thin.

Nathan Cleary will be missing for the first three weeks of the season as he recovers from off-season shoulder surgery, so it means Sean O’Sullivan gets a chance to play halfback much sooner than the Panthers would have hoped for. He was purchased from the Warriors as an insurance policy for when Cleary plays representative football, but in a worst-case scenario he is proven as a capable player who can direct a team around the park. Daly Cherry-Evans would have loved for Cleary to be there, as it would have meant an early-season shootout against the guy who is coming for his Australian jersey, but an upset win will no doubt make the Queensland skipper happy nonetheless.

Penrith grind out a close win (1-12 points) as the home underdog and give punters a nice return at the $3.30. Brian To’o, Tom Trbojevic and Izaak Tago all cross the stripe for a four-pointer.

Penrith 1-12 with To’o and Tommy Turbo scoring a try gives punters a nice price of $9 at Sportsbet.