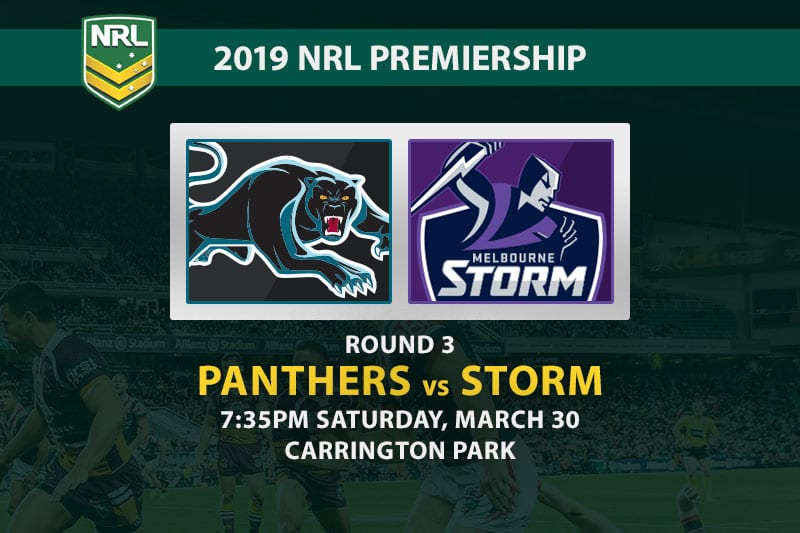 The 2019 NRL Premiership heads out to the country this weekend with a Saturday night clash in Bathurst.

For the Penrith Panthers, this is a chance to prove they are much more than mere finals fillers.

The boys from the west started poorly with a loss to Parramatta, but they bounced back last week to snatch a 16-14 win in a hard-fought contest at Newcastle.

They are boosted by the return of international winger Josh Mansour, whose inclusion sees Malakai Watene-Zelezniak drop back to the reserves.

Reagan Campbell-Gillard is named to start ahead of the benched Frank Winterstein and Isaah Yeo’s concussion gives Tyrell Fuimaono a chance on the interchange.

While Ivan Cleary rings the changes, Craig Bellamy is sticking with the same Melbourne Storm 17 that romped to a 22-10 victory in Canberra last week.

Suliasi Vunivalu was the destroyer with a hat-trick inside half an hour and Cameron Smith was influential whether playing at dummy half or first receiver.

Storm fans must be loving the work of fullback Jahrome Hughes and young half Brodie Croft, who have shown there is plenty of life in this team even after Cooper Cronk and Billy Slater have moved down.

Melbourne boast two of the most dangerous wingers in league football, so picking between them for first tryscorer is always a roll of the dice.

Vunivalu did the damage last week and is every chance to back it up, but this time we are looking at his partner in crime.

Addo-Carr was the more prolific of the two in 2018 and is a massive scoring threat whenever the Storm break at pace.

The $1.83 for anytime tryscorer is a safe bet, but we also like Sportsbet’s $2.30 special for Addo-Carr to score and Melbourne to win.

How are the Storm still this good?

It is hard to imagine any other club playing with such confidence after losing two of their all-time greats in the space of a year.

The Panthers were much improved at Newcastle last time out, but they will have to find another gear if they want to end their hoodoo against Cam Smith and company.

Given their early form and that dominant head-to-head record, Melbourne are a good shout to win it by five points or more.