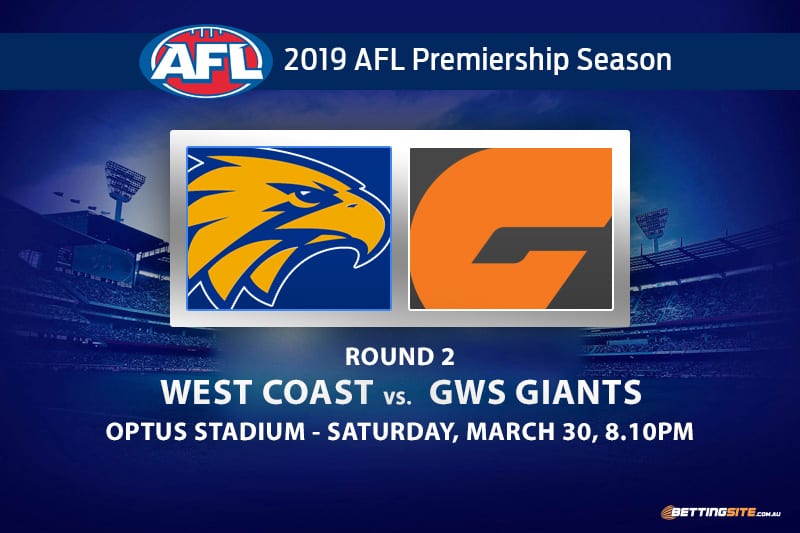 Saturday night clashes don’t get much bigger than this.

How many times have you seen the 16th team on the ladder enter as favourites against the first?

Adam Simpson and his Eagles played poorly against the Lions last week and were on the receiving end of a 44-point belting.

Leon Cameron’s Giants smashed the pedestrian Bombers by 72, putting them atop the ladder with ease.

Whispers during the week have confirmed that Toby Greene will sit out this clash with general soreness — the forward is still not 100% fit after missing large chunks of 2018.

One man who will return to the field for this clash could be the difference.

Premiership Key forward and Coleman Medallist, Josh Kennedy, will overcome a foot strain to play — he is a massive inclusion for the Eagles.

The young Giants midfield were phenomenal in their dissection of the Bombers, winning the disposal and tackle count — if that trend continues, they’ll be a key finals contender once again.

This Saturday night clash will be a cracking contest. Here is a collection of tips for the match.

With Kennedy and Jack Darling both playing in the forward 50, how could the Eagles not exceed 92-points? The tall timber for the Eagles will overcome the GWS defenders on this occasion.

We highlighted the West Coast forwards, but with Jeremy Cameron kicking four goals last week, the Giants could do damage on the scoreboard too. Stephen Coniglio may have got bored with his midfield domination against Essendon, so he went forward and kicked three majors — benefitting from an unpredictable, agile forward setup. If the Eagles’ midfielders aren’t careful, the combination of Coniglio and Josh Kelly will be dangerous.

When Andrew Gaff was suspended back in round 20 last season, Dom Sheed came into the side and starting playing career-best footy. His finals series last year, topped off by one of the greatest goals ever kicked, was second to none. Sheed hasn’t let his late-season form fade away, ccoming out last week and tallying 38-disposals in a complete performance. Expect Sheed to lead the way again this week.

This young man has also gone under the radar of most teams. Hopper burst onto the scene in 2017 with a 32-disposal debut and hasn’t looked out of place since. In round one, he found the footy 28-times and looked completely capable against old foe Dylan Shiel, winning a majority of their contests. Finding the footy 25-times will be like shelling peas for the third-year young gun.

It would be very surprising for the match’s margin to fall in any other bracket. The GWS team is too strong to be belted by over 39-points, but isn’t strong enough to beat the Eagles at Optus Stadium.

With Luke Shuey and Josh Kennedy both playing for the Eagles, the outcome of this match will go the way of the home side. Josh Kelly returning for GWS will make the contest interesting, but not enough to warrant changing our tip.