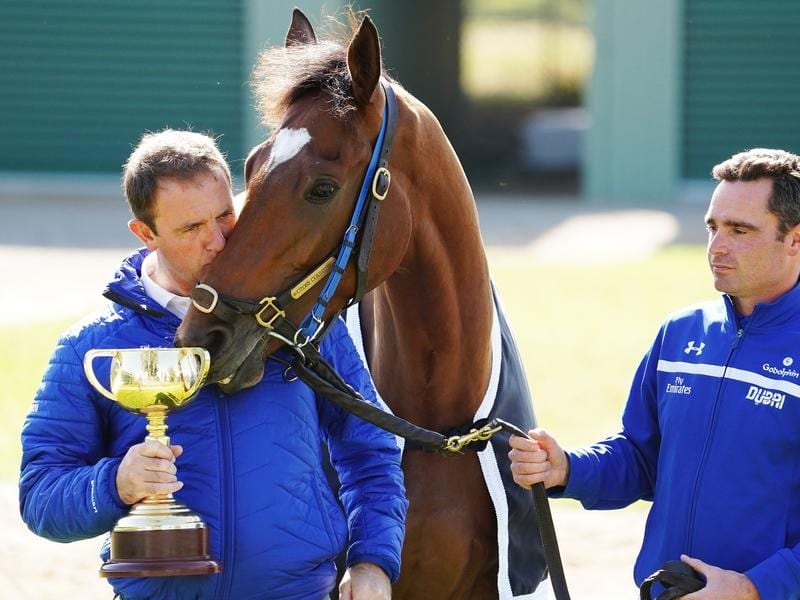 Melbourne Cup winner Cross Counter has entered pre-export quarantine in England ahead of his trip to Australia to defend his title.

He was one of 17 horses to enter quarantine in Newmarket and County Tipperary in Ireland on Thursday for their two-week quarantine.

They are due in Melbourne on October 12, but one will need to stay at home as there are only places for 16 horses.

A total of 38 internationally trained horses are scheduled to undergo quarantine at Werribee in preparation for Melbourne’s spring carnival.

Japan’s Suzuka Devious was the first to arrive on Tuesday with a further three due on Friday night, including last year’s Melbourne Cup third placegetter Prince Of Arran, and three Godolphin horses trained by Saeed bin Suroor.

Another 14 horses, including Lindsay Park purchases Constantinople and Cape Of Good Hope, are due on Saturday with three more Japanese gallopers, Mer De Glance, Lys Gracieux and Kluger, to arrive on Tuesday.

Aidan O’Brien and his son Joseph, trainer of 2017 Melbourne Cup winner Rekindling, have 10 horses in the latest quarantine batch between them.

Among the Aidan O’Brien horses is Ten Sovereigns who flies directly to Sydney to contest The Everest and will be housed at Canterbury Racecourse.

* Horses entered pre-export quarantine in the UK and Ireland

* only one will travel, unless another horses listed does not