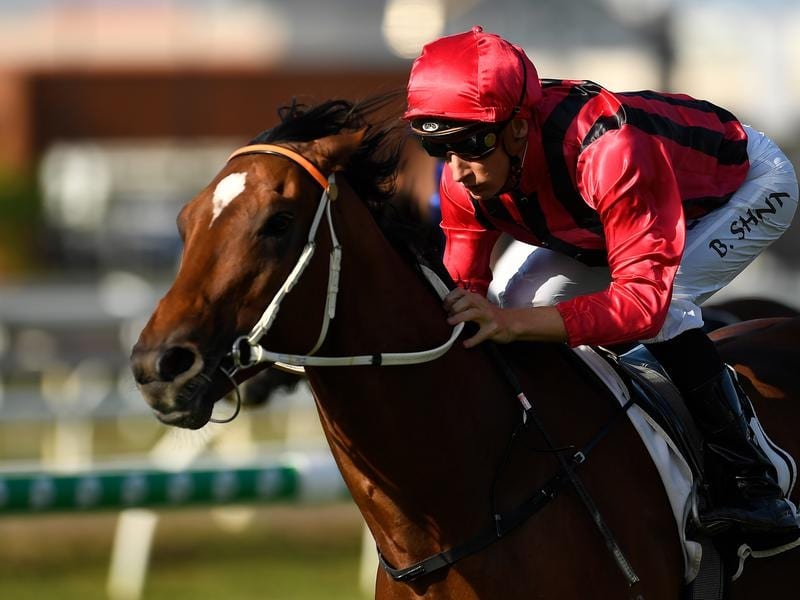 Gem Song can cement his Epsom Handicap claims when he runs in the Shannon Stakes at Rosehill.

The usually reserved Kris Lees believes punters continue to underestimate Gem Song and he is looking to the horse to prove his point in the next two weeks.

While the four-year-old is an early favourite for Saturday’s Group Two Shannon Stakes (1500m) at Rosehill, Gem Song remains at $15 for the $1 million Epsom Handicap (1600m) at Randwick seven days later.

A Group Three winner, the four-year finished on the heels of the placegetters in Kenedna’s Group One Doomben Cup in May and was a fast-finishing third behind highly regarded pair Arcadia Queen and Trope when he resumed in the Theo Marks Stakes (1300m) earlier this month.

“He’s got a good record and deserves a couple of runs now in better company.”

Lees had been in two minds whether to run Gem Song in the Shannon Stakes but when the field came up light with eight starters he opted to roll the dice.

The trainer expects Gem Song to cement his Epsom Handicap claims in Saturday’s race and has no qualms backing the horse up in the Randwick Group One.

“Small field, it doesn’t look a high pressure race so I don’t think it will take too much out of him and he has handled the back-up before,” Lees said.

Brenton Avdulla will have his first race ride on Gem Song at Rosehill and has been booked for the Epsom Handicap mount at 52kg.

The jockey has also been locked in to partner the Lees-trained In Her Time in next month’s $14 million The Everest, testing his mount for the first time in a 900 metre jump out at Newcastle on Tuesday.

“He came up and rode her so it was a good chance for him to have that ride on her,” Lees said.

“She was put under a bit of pressure and she responded well so all is in order.”

In Her Time is scheduled to have a barrier trial on Tuesday week before resuming in The Everest (1200m) at Randwick on October 19.

Lees also confirmed Graff would race next in the Silver Eagle (1300m), a new race to be run at Randwick a week before The Everest.