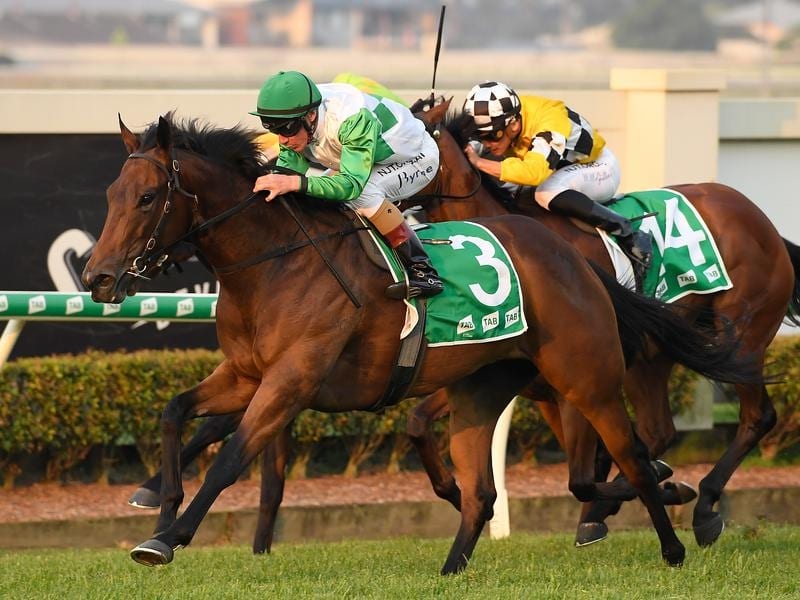 Top Brisbane mare Outback Barbie has failed to run a place in three Eagle Farm starts but her trainer Tony Gollan believes it is a false statistic leading into the $250,000 The Gateway.

The lure of an automatic entry for the Group One Stradbroke Handicap means Outback Barbie will run in The Gateway in preference to the Listed Lough Neagh Stakes on Saturday.

The Gateway is a new race for four-year-olds which carries a ballot free entry in the Stradbroke in June.

Outback Barbie worked with her usual partner I’m A Rippa on the Eagle Farm course proper and both pleased trainer Tony Gollan with their efforts this week.

“She was one of several very good runs in the George Moore. She is out to 1400 metres and third-up so we would expect her to be in the finish,” he said.

If there is a down side it is that Outback Barbie has had three starts at Eagle Farm without running a place.

But those races were all in Group One and Group Two winter carnival company.

“Her first go at Eagle Farm was very good in the Kingsford Smith Cup when she got beaten about two lengths after striking interference and travelling wide,” Gollan said.

“Then she was ordinary in the Dane Ripper and she was at the end of her campaign in the Tatt’s Tiara but still only finished a bit over two lengths away.

“I wouldn’t be worried about Eagle Farm and I won’t be using that as an excuse if she gets beaten.”

Gollan will also have Vega One in The Gateway after the gelding ran second in the Recognition Stakes.

“The key to him is drawing well and he has barrier two on Saturday,” Gollan said.

“When Baylee Nothdurft was suspended we got in quick and booked Michael Rodd.”

Melbourne Cup-winning jockey Rodd will also ride I’m A Rippa who will tackle the Lough Neagh after two solid runs back from a spell.

The Singapore-based Rodd is in Brisbane to ride for NSW in the annual State Of Origin jockey series held on Friday and Saturday.

“You know what you will get with him as he will go forward and they will have to run him down,” Gollan said.

The premiership leading trainer will also launch the Magic Millions campaign of smart filly The Actuary in the Listed Calaway Gal Stakes on Friday at Doomben.

“She is well bred being by the top sire Sebring and I liked her trial win,” Gollan said.