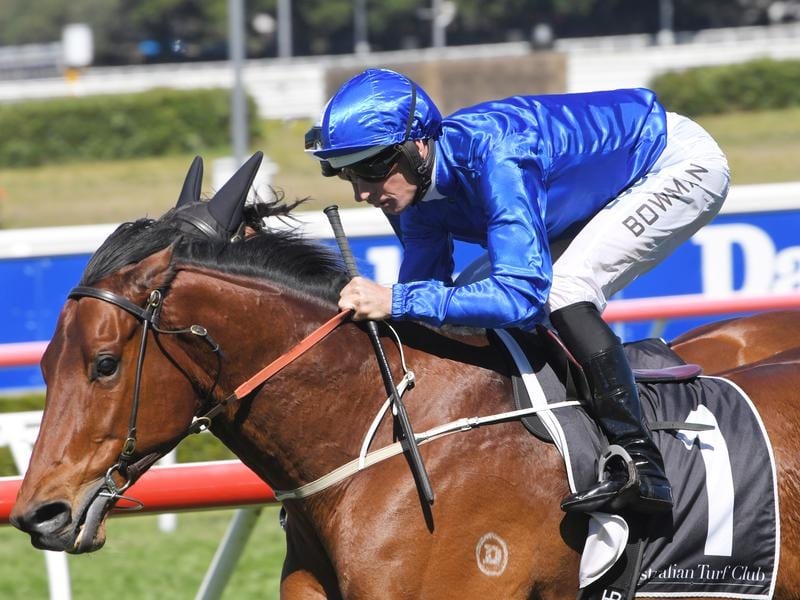 Godolphin’s Osborne Bulls has had a race day gallop ahead of likely return in The Shorts.

Godolphin has yet to name its Everest contender but last year’s surprise placegetter Osborne Bulls has shown he is ready to put his credentials to the test.

Osborne Bulls and stablemate Home Of The Brave worked together between races at Randwick on Saturday, pleasing trainer James Cummings.

Both could resume in The Shorts on September 21 with the race shaping as scintillating a preview for the $14 million Everest on October 19 as Saturday’s Concorde Stakes won by Redzel proved.

After receiving a last-minute call-up last year, Osborne Bulls finished third behind Redzel and Trapeze Artist in The Everest.

He comfortably held Home Of The Brave in Saturday’s 800m-gallop, running 47.36 secs.

“I’m delighted. It was beautiful from both horses,” Cummings said.

“It was nice for them both to come out here and get that race day feeling again after a little while off.

“Osborne Bulls is going really well and now we’ve just got to get the timing right with him and we’ll be excited getting him back to the races in The Shorts in a couple of weeks.”

Cummings says Home Of The Brave may also run in The Shorts but there is also the option to run up the straight at Flemington in Melbourne.

“I’d prefer to keep him in Sydney but if my other sprinters and the programming forces me to I might go down to Melbourne,” he said.

Both are also down to trial at Randwick on Tuesday but Cummings said he would not make up his mind until that morning.

“His action is better than it was last prep so that’s exciting.”

Since The Everest, Osborne Bulls has posted a Group Two win and five consecutive Group One seconds, the most recent to The Bostonian in the Doomben 10,000 in May.

Osborne Bulls ran in the 2018 Everest for the Australian Turf Club but Godolphin has its own place this year after winning the bid to gain the slot forfeited by Damion Flower who is facing serious drug importation charges.