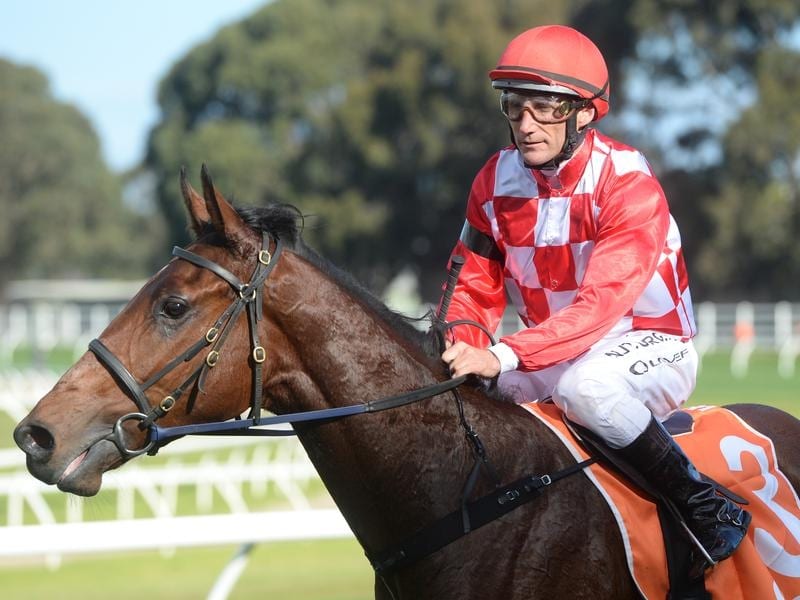 Saltpeter has made it successive wins, taking out the Vale Graham Salisbury Handicap at Caulfield.

Saltpeter has shown his versatility with a drop in distance to claim his first city win at Caulfield.

The John Moloney-trained two-year-old sat back when successful over 1250m at Geelong on June 12 before dropping150m in distance to score an on-pace win in Saturday’s Vale Graham Salisbury Handicap.

Ridden by Damien Oliver, Saltpeter ($9.50) scored by a long head from Clean Machine ($5) with Savannah Cloud ($21) three-quarters-of-a-length away third.

The 12 jockeys who rode in Saturday’s opening race wore black armbands in a mark of respect for Salisbury who died last week following a long battle with cancer.

A minutes silence was observed before the race as a group of jockeys lined the track with Oliver laying a wreath at the Caulfield winning post.

Salisbury was a clerk of the course for 40 years on Melbourne racetracks but is best remembered through his work with Melbourne Cup winner Subzero.

Oliver said it was an honour to win the race named in Salisbury’s honour.

“He was a genuine old-school gentleman of the turf,” Oliver said.

“Graham led me in on many winners and also probably helped me win many races getting me to the start in one piece as well.

“We cannot forget the work he and Subbie have done for the sick and disadvantaged kids and the elderly as well.

“Both were fantastic contributors to racing well after their racing days.”

Oliver described Saltpeter as a “little ripper” and a foolproof little racehorse.

“He was professional at Geelong and we were looking at a midweek race but we put him in this race because he’s improved so much,” Oliver said.

“He puts himself in the race, travels well and gives you everything he’s got.

“I’m sure he can skirt around the fringes in the spring and there’d be a nice race for him.”