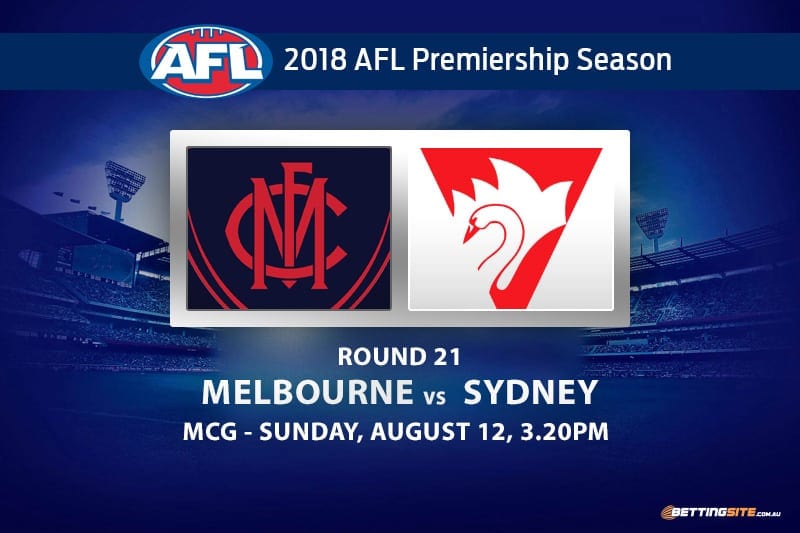 The two biggest cities in Australia will meet at the home of footy for a massive match of football.

The Melbourne Demons will host the Sydney Swans in yet another match with huge finals consequences in Round 21.

Last week featured a record amount of  close contests and we could be set for a repeat here, despite the different form these sides will bring into the game.

Sydney overcame a gallant Collingwood in what was the closest match of Round 20. The Magpies overcame a four-goal fourth-quarter deficit, only to see a late Sydney dribble kick find the goal for a two-point win.

The Swans have convincingly won the last three matches between these sides, despite Melbourne’s sharp improvement over the last 24 months.

Injures have struck the Demons and Swans equally in 2018. The Demons have been forced to cope without their Captain Jack Viney for almost the entire season, with Michael Hibberd and Jake Lever — key pillars in the backline — also missing key stretches.

This match is certain to shake the AFL ladder in some way, no matter who wins the clash.

Here are our tips for this week’s Sunday afternoon blockbuster between the Demons and the Swans.

The Sydney Swans may be struggling to score in recent weeks, but one recurring factor in their brand would have to be the defensive effort they bring each week. Most sides would be lucky to score 80-points when they face the Swans and the same should be said about the Demons this week.

Melbourne’s key backs may be missing, but Sydney is not a team that will be able to take advantage of that. Buddy Franklin does bring good form into the game, but he leads a small forward line that has failed to click consistently. The Demons should be able to hold the Swans below 70 points for the night.

Clayton Oliver has spent a fair amount of time forward in the last two weeks, and it has paid off in spades. Oliver kicked two in the opening quarter last week before spending the rest of the match in the midfield. If Melbourne go with the tactic again, we like the odds on offer for Oliver to influence the scoreboard.

Big Buddy Franklin needs to play a massive match if the Swans want to win the game. The form that Buddy will bring into this match is bright after a quiet run. Lance had 10 shots on goal last week against the Magpies, slotting six. The big fella loves playing on the MCG and will be given every opportunity.

Melbourne Demons vs. Sydney Swans Round 21 – First to Tip

Last week against the Suns, Melbourne played in one of the highest scoring first halves in the modern era of football. With a nine goal first quarter, which was higher than the Suns total for the day, the Demons were well on their way to a very high scoring match. The Demons are in good form and will be very keen to start this match just as quickly as the week prior.

This match could go either way, but the Demons form has been stronger over the past two weeks. If the Swans had another taller marking target, they would have a genuine chance to win this match.