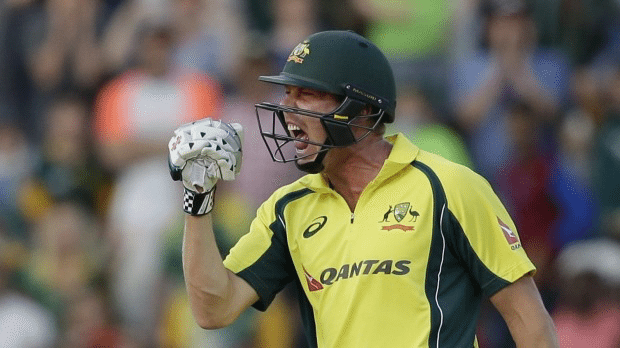 With a few lusty swings of his immense blade, rejuvenated Aussie master blaster Glenn Maxwell propelled his nation into the final of the one day international tri-series.

He hammered the West Indies, but can he do it against the stiffer competition of South Africa in the final?

It remains to be seen, but Maxwell was simply unstoppable in the do or die clash with the Windies last week, coming to the wicket with the Australians still needing 62 off 50 balls, Maxwell made a mockery of the chase, pummelling an unbeaten 46 off just 26 balls to vanquish the Windies in a result that guarantees safe passage to the final.

You know he is in form when the unexpected comes off and so it did when Maxwell blasted a massive six off tormentor Sunil Narine – using his signature switch hit to turn cover into midwicket.

It is this sort of high risk, high reward batting that gives Maxwell currency and his ability to hit the ball further than most other cricketers means he has to come under consideration whenever the Australian side plays.

When he was finished, Maxwell still had eight balls to play with and six wickets in the shed.

Maxwell has paid over 100 one day internationals and has shown throughout that period that he knows how to exploit a run of form.

And that’s why we think he could provide some real value to top score for the Australians in this one.

A lot of things will need to go wrong at the top of the the order, but the $8.50 on offer with sportsbet.com.au is juicy.

Captain Steve Smith ($4.50) and the vastly improved Mitch Marsh ($8.50) both bat ahead of him and are coming off big innings against the Windies.

Marsh clubbed 79 off 85 balls to be there at the end with Maxwell, while Smith grafted 78 off 107 in a steadying innings that laid the platform for The Big Show’s late-order heroics.

“I was literally speechless at the other end watching an innings like that,” Marsh said of Maxwell.

“Maxi has had a lot of doubt and hasn’t been in the greatest of form but an innings like that shows why he’s one of the first picked in this side, because he’s so dangerous and can win us games like that in a few overs.

“Really rapt for him.

“He actually told me we’ll just take them for ones.

“Next thing he’s playing a reverse-sweep for six. I absolutely loved it.

“Maxi is a free spirit, you’ve just got to let him go and do what he does.

“When it comes off like that it’s unbelievable to watch.”

Mitchell Starc was the best bowler for the Australians as the Windies amassed 8/282, taking 3/51 with the new ball.

The West Indies were not perturbed by the loss to the Australians, pulling off a stunning victory over a crumbling South Africa in the last game of the series that propelled them from last into the final.

The Calypso Kings ran up another big score, 285, on the back of a century from Dwayne Bravo, and then skittles South Africa for 185 in reply.

Narine was again the destroyer with 3/28 and he got plenty of help from speedster Shannon Gabriel, who took 3/39.

Bravo’s 102 off 103 balls was the difference and featured 12 fours and four towering sixes.

Kieron Pollard was also instrumental in the win, striking 62 off 71, with seven fours and two sixes, while Jason Holder chimed in with 40 off 46 and Carlos Brathwaite 33 off 42.

While he failed against the Proteas with a first ball duck, without the likes of Chris Gayle, Samuels has been the nation’s best one day international batsman over the past 18 months.

And he showed that against the Australians, with a pristine 125 off 134 balls that included 14 fours and two sixes in a knock that should have been match-winning, were it not for Maxwell’s finishing abilities.

You can’t take a golden duck into account when considering form, so we’re backing him to bounce back in the final, big time.

He is the $4.50 favourite to score the most runs for the Windies, equal with Bravo.

They are the two men with centuries to their name in the last two games and will be the wickets Australia most prizes.

Both of these teams will be high on confidence and both go into the game on the back of potential elimination wins. On paper, you feel the Australians are more talented, but the West Indians have some real form and their crushing victory over South Africa makes this one anyone’s game. The Australians are favourite for good reason, but there is real value in the West Indies at long odds. They have a strong pace attack that is improving with every match – especially Gabriel – and a world class spinner that has really tormented both Australia and South Africa in this series. It is any one’s game and, call us unpatriotic, but we’re going with the underdog to pull of a victory in the final on their home surface.