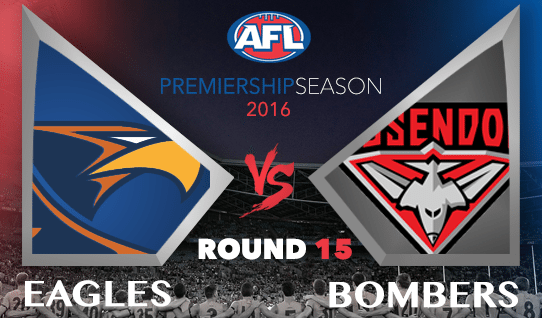 THIS is getting ridiculous.

Yes, we know it is the Bombers, but, come on. $5.50 for West Coast spearhead Josh Kennedy to kick the first goal?

Yes, he is a gun and he is second in the Coleman Medal, but there are 43 other players in this game.
We’re not touching the $5.50.

Surely there are options that can provide some better value than that?

The Frenchman has been very prolific, if a little inconsistent this season and is a viper when the ball hits the deck.

He is also more than capable of taking a grab and sending one home from a set shot and, at $9, he represents a far more prudent bet than the towering Kennedy.

Kennedy did feast on Brisbane before the Eagles’ bye with five goals, but LeCras was there abouts with four of his own, after going goal less against the week before in a loss to Adelaide.

LeCras loves his home deck at Domain and the could put the Bombers to the sword, given they will have their hands full with Kennedy and fellow big man Jack Darling.

If you love something of a hail mary bet, then half back come midfielder Elliott Yeo could be the man for the job.

Yeo has mixed some very poor form with some superb performances this season, but one thing he has done is kick goals consistently.

The running machine has booted at least one in each of his last six appearances and, if he can get off the leash early, will be a real shot to slot the first for the Eagles.

Loves to get forward and knows how to pierce the big sticks when given the chance.

Let’s not forget there is another team playing in this game.

While the Eagles are expected to win and win well against the depleted Bombers, they are no certainties to kick the first goal of the game.

While key forward Joe Daniher is the obvious pick at $12 with sportsbet.com.au, young buck Orazio Fantasia is the man who is in form.

Like Yeo, Fantasia tends to get named on the half back line for the Bombers, but his running chops frequently take him forward.

He led the Bombers its four goals against Greater Western Sydney before last week’s bye and has found himself on the scoreboard in eight of 12 games this season.

By no means a certainty, Fantasia looks to have found some more time up forward and – if you think the Bombers can surprise – you could do worse than having a flutter on him for first goal.

On the hunt for an outsider to back in for first goal for the Bombers – aren’t they al outsiders? – Zach Merrett bobs up as a left field option.

Merrett once spent most of his time in the forward line, but has exclusively become a midfielder – and might be the brightest spot in a dark season for the Bombers.

The ball magnet has had some massive games, including a 37 disposal effort against Fremantle, and has done most of his work in the midfield.

This is more of a hunch pick than anything, but, considering the Bombers are on a hiding to nothing as it is, you may as well get some real value if they can somehow perform a miracle.

On form, there is no way you can back Essendon to even get close to their Eagles on their home deck in Perth. While the Eagles are a shell of a side when they hit the road, Domain Stadium is their fortress and they are set to dine on Bomber in the first game of the round. They got back on the winners’ list after two straight losses before the bye, downing Brisbane by 49 points, 20.11 (131) to 12.14 (86). The Bombers are staring down the barrel of another 100 point loss, after putting up a strong fight against Greater Western Sydney on their home ground, 12.18 (90) to 17.15 (117). That was only a week removed form a 100 point thrashing at the hands of top of the table Hawthorn and the Eagles would be licking their lips. We would usually balk at the site of a 70 point line, but, with the way the Bombers are travelling, this almost feels generous.