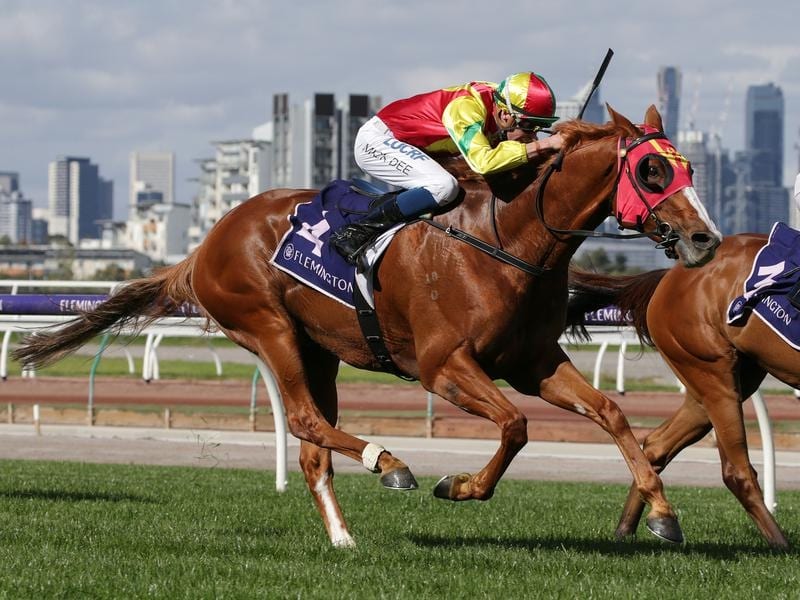 Observational (l) could back up at Warrnambool after his fast-finishing win at Flemington.

Having cut his teeth around the western districts of Victoria, trainer John Sadler has two races on his bucket list.

The two major flat races at Warrnambool’s May carnival, the Warrnambool Cup and Wangoom Handicap, have to date eluded him.

Sadler hopes to turn that around at next week’s carnival with the likelihood Observational will back up in the Warrnambool Cup.

Runner-up to High Church in the Warrnambool Cup in 2017, Observational is one of 32 nominations for the race on May 2.

“We’ll either back up and go to Warrnambool or come back here on the Saturday after,” Sadler said.

“The Cup and the Wangoom are on the bucket list of races. I’ve never won either of them but I’ve run second a number of times.”

Ridden by Michael Dee, Observational ($20) came from last on Thursday to nose out Sin To Win ($7.50) with Valac ($5) three lengths away third.

Observational had finished eighth in the Easter Cup at Caulfield last Saturday and Thursday’s win was his fourth run back following a break.

“I’ve got to thank our farrier John Bunting,” Sadler said.

“The horse had awful feet issues and he suggested we give the horse a very good break.

“He cut the foot right back, let it grow out and we’ve just brought him along slowly.

“I thought his last couple of hundred last week was pretty good and he came through it really well and I thought he presented a lot better today than what he did on Saturday.

“He was fit today for probably the first time.”