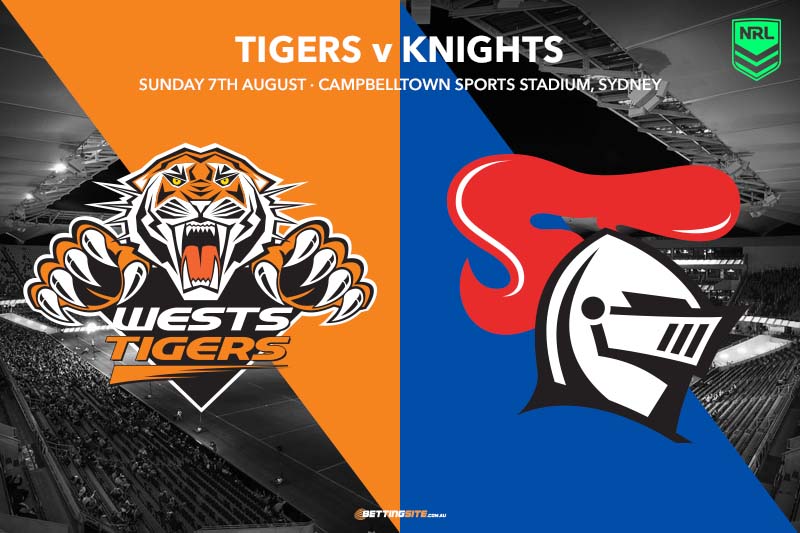 The Wests Tigers will have a golden chance to secure back-to-back wins when they take on the Newcastle Knights on Sunday afternoon.

The Tigers last fortnight has been a far cry from their form earlier in the 2022 NRL season, and it resulted in a 14-point win over the Broncos.

The Knights’ woes only got worse when they lost by 14 points to the Bulldogs at home, with their second half attacking performance drawing enormous criticism.

The Wests Tigers stunned everyone when they rebounded and went even harder after being robbed in North Queensland.

While their season might have been over for several weeks now, the playing group should be proud of their efforts. It appears once the Tim Sheens/Benji Marshall appointment was made official, it provided clarity to a playing group that has had to put up with headlines about their coach potentially being sacked for more than 18 months.

Walking away from the game against the Warriors without scoring a try also seems to have been the low point of their season, and over the last month they’ve been exrtremely competitive in all four games they’ve played.

They are a $1.48 favourite in the head-to-head market and the longer the Newcastle Knights unravel from the inside, the shorter that price will get.

The 13-plus margin at $2.75 should be getting a mile of attention in this one. Not because the Tigers are an attacking juggernaut, but they’re up against the worst defence in the competition.

Ken Maumalo and Adam Doueihi shape up as the best options in the anytime try scoring market at $1.80 and $3.50 respectively with the top Australian betting sites.

Newcastle have been nothing short of disgraceful in their last month. Their opposition for this match has competed with tenacity, while the Knights turn their toes up at the first possible moment. In 12 of their 14 losses so far for 2022, they’ve lost by 13 or more points, which could get them in to the record books should that form continue.

There’s been farcical controversy surrounding David Klemmer, who has been stood down for the match for abusing a trainer.

Many believe there is more than meets the eye, and on the surface it looks like a power struggle is ensuing between a playing group who has for too long been able to get away with lazy performances.

The club are wielding an unnecessarily big stick to try and correct it, and that only means poor results in the short term.

It’s almost a miracle they come in as a $2.65 outsider and the line is only +6. Given how bad the Knights’ defence has been, that line is nowhere near long enough.

Dominic Young has been one bright spot in their season and the $2.20 with Palmerbet is a good option in a same game multi. He has nine tries in 15 appearances so far this season and has proven a handful with his yardage carries.

This contest looks beyond them in terms of backing them as a winner. They’ve been abhorrent since Round Three.

There’s nothing that leaps off the team sheet for either team, but the halfback stoush between Jock Madden and Jake Clifford will be one to keep an eye on. The Tigers seem to win whenever Madden comes into the side, and the Knights have a strange infatuation with getting Luke Brooks to their club.

Clifford was the man of the match in the last game between these two, but unless he shapes up, the missing Tigers halfback from this game could take his job next year.

The Tigers will win at the 13 plus margin. Fort Scratchley has been defunct for 50 years but somehow still defends better than the city it resides in.

Tigers 13 plus with Dom Young, Ken Maumalo and Fa’amanu Brown to all score a try pays $37.18 at Ladbrokes.