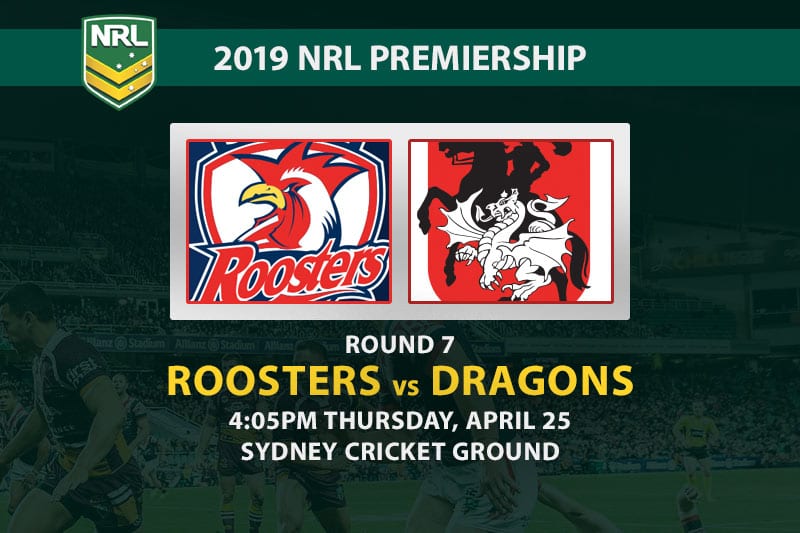 The annual ANZAC Day clash is shaping up as a beauty.

The Sydney Roosters are in fine spirits after edging out Melbourne in a thrilling grand final rematch last week.

That win came at a cost, however, with Luke Keary ruled out for Thursday’s game after copping a head knock.

That means Latrell Mitchell will start in the halves, with Joseph Manu shifting into the centres alongside Mitch Aubusson.

Jake Friend is back after a spell on the sidelines, which sees Victor Radley move from hooker to lock.

The St George Illawarra Dragons head to the SCG as underdogs, but that will not bother a team that has won four games on the bounce.

They had to work hard for their 12-10 win over Manly last time out, with Mikaele Ravalawa crossing for the match-winning try in the 77th minute.

The Red V have made no changes as they look to replicate last year’s dominant victory in this fixture.

Sydney’s no.2 always needs close minding, but his threat level rises considerably when the Roosters play host. Tupou has scored tries in five consecutive home games and looks a sound bet to notch a major at any time.

Matt Dufty and Mikaele Ravalawa did the damage against the Sea Eagles last week, yet Pereira looks as lively as anyone in St George Illawarra’s back half. Again, we like the anytime tryscorer market over the riskier exotics.

Do not underestimate how the absence of Luke Keary might affect Sydney’s chances.

The Roosters have quality everywhere and can fill gaps better than most teams, but forced changes can upset even the winningest of systems.

It is also worth noting they were 20-0 up on the Storm last week and only just escaped with the win after a lazy second half.

St George Illawarra’s forward pack is working well and the team’s form is hard to fault, so there is value in backing the outsiders to cover the line at the very least.