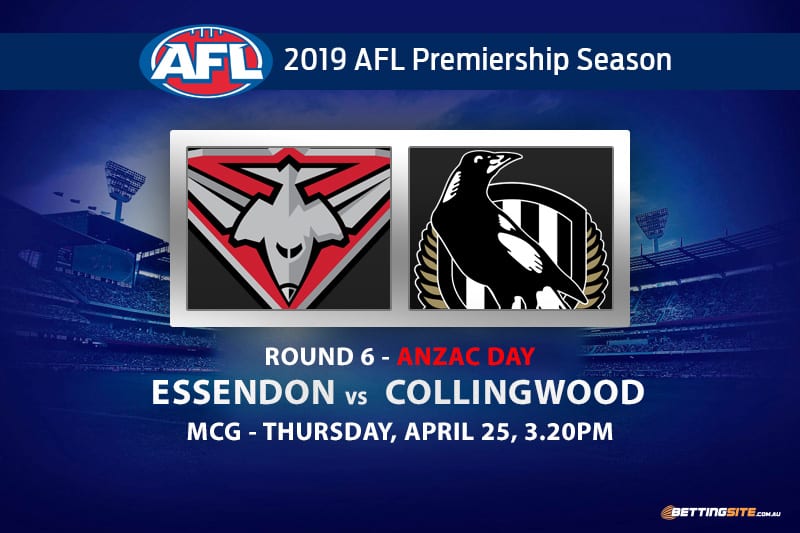 After paying respects and honouring our fallen soldiers, we turn our attention to one of the biggest ANZAC Day clashes in years.

As per this traditional AFL fixture, the Essendon Bombers and Collingwood Magpies will battle at the MCG in the twilight time slot.

This year marks the 25th time these sides have come together on this day, dating back to the famous drawn game of 1995 that captivated the football world.

Nathan Buckley’s Magpies sit fourth on the ladder, but the Bombers are in good form and have scaled to seventh after beginning the year at 0-2.

Essendon’s small forwards are fit and firing, especially Anthony McDonald-Tipungwuti, who has kicked 11 goals in the last three matches, including a bag of seven last fortnight.

No match will be as big as this one in round six, so here’s a few tips to begin the round of footy.

Michael Hurley is an excellent defender that loves to intercept the footy when he can. The Magpies have a slight issue when it comes to forward entry and have been known to give up plenty of intercept marks as its forward line works on synergy. Hurley has dominated ANZAC day matches in the past, last season he had 29 disposals and was best on for the Bombers. 20 disposals could be a bargain here.

Last year Crisp was forced to play a lock-down role in the back half, which didn’t allow him to run off half back and get kicks, but this year, the Pies have Darcy Moore and Jordan Roughead, which has allowed the rest of the backline the freedom to attack from the back half. Jack Crisp had 32 disposals in round two and looked classy in the defence, we expect a similar performance this week.

Both teams have kicked a large amount of goals in the past fortnight, especially the Bombers who have one of the best functioning forward-lines in the league coming into Round 6. Rounds one and two were horrific for the Bombers, but they have since become a scoring machine, with Jake Stringer and Orazio Fantasia firing on all cylinders.

If Brodie Grundy can get on top for Collingwood in the ruck, the already-strong Collingwood midfield is going to be able to provide more supply to its forwards, who found some serious form last week. In good conditions at the MCG, we’re expecting these two sides to move the ball quickly and score heavily.

No player on either side is as dangerous and talented as Jordan de Goey when he’s at the peak of his powers. The Magpie dynamo is running into form and returning to full fitness and could seriously turn on a big display on one of the game’s biggest stages. If he has a handful of goals and gets the ball 20 times, he’ll win his first ANZAC Day Medal.

This is going to be a tight one.

Collingwood may have the superior midfield on paper, but the synergy with the forward line has been inconsistent so far this season, especially against good teams.

Essendon’s form in the last three weeks cannot be ignored and while they’re much better-placed to win this game than they have been in recent years, we think they’ll fall just short, but carry the line.