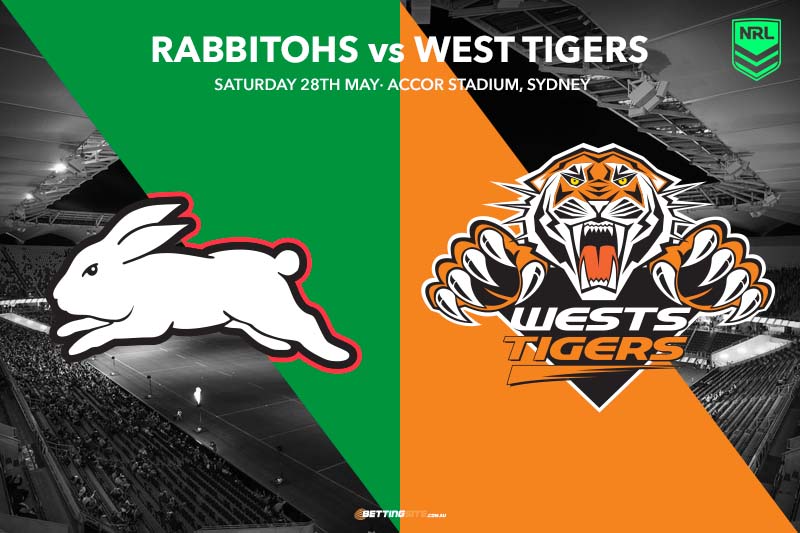 NRL Super Saturday will continue from 5:30pm at Accor Stadium in the rematch of the Tigers first win of the season as they take on the South Sydney Rabbitohs. It was an epic clash that was decided by a Luke Brooks field goal in the dying minutes to seal the win for the Tigers.

Returning from injury this weekend is Brooks along with fullback Daine Laurie for the Tigers, with veteran winger David Nofoaluma named in the reserves. Cameron Murray, the skipper of Souths has also been named in the reserves and is allegedly a chance of returning from injury this weekend, while winger Taane Milne must pass HIA protocols to take his spot on the wing.

Following their huge loss to the Raiders on the weekend, the South Sydney Rabbitohs have had no friends in the betting markets, drifting from $1.24 out to $1.46. This has seen the Wests Tigers trim up from $3.80 into $2.75. Of 39 clashes the Tigers have only won 17, however, recent form of the Tigers having been close to beating the Sea Eagles and Dragons before beating the Bulldogs last weekend suggests they’re not as bad as numbers suggest.

The West Tigers are currently paying $3.80 to win by 1-12 points which is great value for a club welcoming back some of their stars from injury against a club they’ve already beaten this year.

Daine Laurie for the Tigers has been in great form to start this season, not only assisting on tries and breaking tackles with ball in hand, but his effort in defence and kick chases has been incredible, most notably when he smashed Eels captain Clint Gutherson on a kick chase earlier this season. Expect Laurie to return in similar form, and with the motivations that come with Indigenous Round, score his first try of the 2022 NRL season at any time paying $3.45 with the top bookmakers.

With wet weather predicted for Saturday in Sydney, and Accor Stadium being a difficult ground to lay expansive football on and score points, look for the total match points to fall below the 41.5 mark. Both clubs have been inconsistent in their ability to attack and score points, but are both sides coached into defensive mindsets, making the ‘unders’ play much safer than the overs.

This battle of the halfbacks will be won or lost in game management. From simple aspects of the game such as directing players in act to get to the right spots on their field during the set, to kicking effectively and making the opposition work hard from their own end. There could be huge discrepancies between these two sides and halfbacks as Ilias has struggled this season, while Jackson Hastings has almost single handedly turned the Tigers club around.