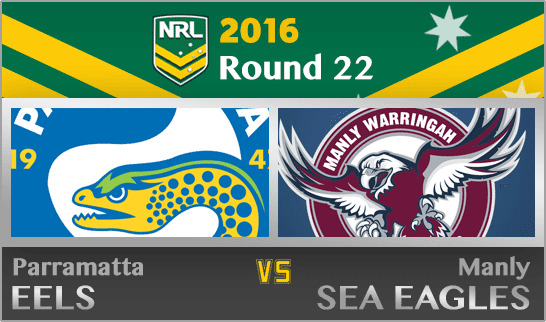 FRIDAY night footy presents a match that could have been interesting had both teams been in the finals hunt.

The Manly Sea Eagles still harbour finals hopes on the back of four straight wins, while the battered Eels continue to limp towards the end of the season.

The crushing win left the Sea Eagles just two points adrift of the eighth-placed Warriors, but Sportsbet.com.au is not confident Manly can bridge the gap.

Manly coach Trent Barrett is optimistic his side can make a late finals bid after an indifferent season.

“We are still hanging around (the top eight), there is still a long way to go, but the last month has been good.” Barrett said.

“We always thought our back end (of the season) would be better but we did not count on the run of losses.

“But there was always hope there. We have come out the other end and we have been playing some good footy.”

The off-field dramas the Parramatta Eels have had to face are well-documented, but the team’s lack of effort on the pitch has been just as dispiriting.

The Eels have not won since round 18 and look to be counting down the hours until the end of the season, but no longer have the optimism of a potential Jarryd Hayne return.

The former Dally M medallist signed a two-year deal to play for the Gold Coast Titans, reneging on a “lifetime agreement” that purportedly meant that if Hayne ever returned to the NRL, it would be to play for Parramatta.

It is a bitter result for a club who needed a feel-good story heading into the off-season.

Hanye said he was ‘dissapointed’ he would not be returning to the Eels.

“A part of me is sad because I’m not going to go back to the club that I grew up with and loved as a kid,” he said.

“At the end of the day I wanted to play footy this year. The way that the [Eels] board is – the way things have gone this year, couldn’t get something done, it’s sad and it hurts me just as much as I know it hurts the fans down there.”

This is a must-win match for Manly, who play the fifth-placed Bulldogs next week, followed by matches against the second-placed Storm and the third-placed Raiders.

The Sea-Eagles face the Warriors in the final match of the regular season, which could be a mini-final if the results align.

Thankfully for the home side, they enter Friday night with a clean health and a young gun who is playing at an elite level.

Tom Trbojevic has been the catalyst for their late season revival.

The man they call ‘Turbo’ was sensational in the Sea Eagles’ victory over the Knights, producing two try assists and six tackle breaks in Manly’s fourth straight victory.

Manly coach Trent Barrett said Trbojevic’s great form was indicative of their overall professionalism of the club, but was wary not to heap too much pressure on the strongly built teenager.

“Tom is a by-product of what is going on around him,’’ Barrett said.

“He’s going really good but, I mean, he’s only young. I hate to … we see it so often, everyone puts so much pressure on these young blokes. He’s 19 years old.

“We will try and protect him as much as we can and let him develop. He needs that. We’ve got to do the right thing by him and let him come along slowly. He’s a good player, no doubt about that.”

We are backing Tom Trbojevic to have an impact on Friday.

Trbojevic is at $10 to score the first try of the match on Friday night at sportsbet.com.au.

Barrett said that while he is comfortable being in the headlines it was the club has an obligation to protect him from the pitfalls of sporting fame.

“Yeah, there’s spotlight, it doesn’t worry him,’’ he said. “But I think we have a responsibility to him to shield him from it as well … and we will.”

For the Eels, the end of the season cannot come quick enough – which does not bode well for an entertaining Friday night footy contest.

We have no doubts the Sea Eagles will record their fifth straight victory, keeping the pressure on the top eight in the process.