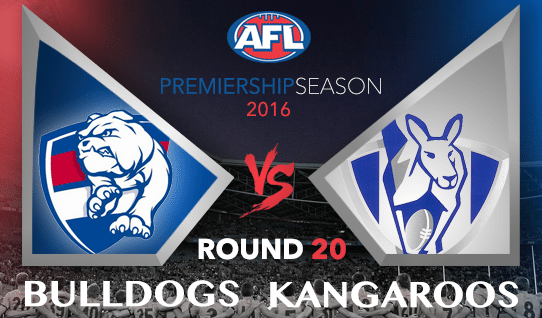 IS this the battle for seventh spot?

It could end up being the battle for who makes the eight and who misses it when the Western Bulldogs take on North Melbourne at Etihad Stadium.

Locked on 48 points, both teams are three games ahead of Port Adelaide.

It would take a monumental capitulation for either of these two sides to fall out of the finals with four games to go.

But the Dogs have been ravaged by injuries and let’s not forget the Kangaroos lost five in a row, before their last two matches produced wins.

One of these two teams will go a long way to sealing their finals aspirations in this game.

Jamie MacMillan led the way off half back with 31 disposals and eight marks, while Sam Gibson was solid again with 28.

It’s been either feast of famine for Gibson this season, with eight games over 25 disposals and just as many under 20 touches.

He’s had 33 and 28 in his past two weeks and he might be hunting for some redemption, after a 15 possession against the Dogs in round six.

He is $1.40 with sportsbet.com.au to continue his solid run of form and gather 25 or more disposals.

All-but cooked a month ago, towering forward Drew Petrie had a night to remember for his little mate Boomer, ripping down 12 marks and booting two goals from his 18 disposals.

His return to form has been welcomed by all and sundry down at Arden St and he is our pick for first goal at the $11 quote with sportsbet.com.au.

By contrast to the Roos, the Dogs had a disastrous night down at Simonds Stadium, losing Matthew Boyd before the first bounce and Tom Liberatore and Jackson MacRae during the 16.7 (103) to 11.12 (78) defeat at the hands of the Cats.

Those men down just compounded the season-ending injuries to Mitch Wallis and Jack Redpath, and the loss of Dale Morris the week before.

If there was one shining positive to come out of the game, it was the effort of much-maligned big forward Tom Boyd.

The Dogs $6 million man has been worth about 6 cents so far this season, but he showed a glimmer of hope for fans at Whitten Oval with three goals, from his 18 disposals, finally looking like the tower of strength they had hoped he would be when they pried him away from Greater Western Sydney.

Hopefully he has some new found confidence and will present to his midfielders early, because he is our pick for first goal scorer for the Dogs in this one, at $13 with sportsbet.com.au.

The Dogs’ decimated midfield was led manfully by Jason Johannisen – another player who has missed extended time with injury this season – and Liam Picken, who both had 26 disposals.

But the man who had a ton of it – and much of it under pressure – was the returning Luke Dahlhaus. Every time the Dogs get one back, they seem to lose one, but Dahlhaus, after having missed six games with injury, returned like he had not missed a beat.

We think the $2.75 quote for 30 or more disposals with sportsbet.com.au represents great value. The Dogs simply do not have any men left and that means much of the inside work will be left to Dahlhaus against the Roos.

Luke Dahlhaus to have 30 or more disposals ($2.75 with Sportsbet.com.au)

We’re bullish on the Kangaroos (see what we did there?). The Doggies have not managed to beat North in nearly two years, having lost their past three and we feel like they have lost far too much cattle to knock over a North Melbourne side who might have just slightly turned the corner. Many would urge you not to write the Dogs off, and they have been gallant, but the soldiers they have lost are right at the pointy end for them and that will make it hard.