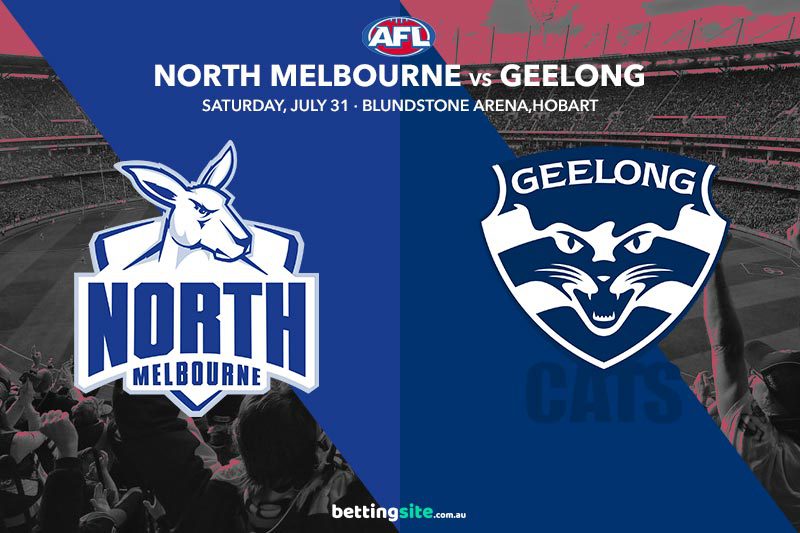 The Geelong Cats will make their Blundstone Arena debut this Saturday when they take on the North Melbourne Kangaroos in round 20 of the 2021 AFL Premiership season.

Chris Scott’s Cats jumped into outright premiership favouritism after beating Richmond by 38 points at the MCG, where Tom Hawkins and Esava Ratugolea both kicked four goals.

David Noble has coached the Kangaroos into form since the bye, and their best game of the year came against Carlton last weekend. The 39-point victory was the Roos’ biggest of the season, as the Blues could not stop their quick transition from defence.

The Roos will be without Ben Cunnington for the rest of the 2021 season, as the two-time club champion underwent surgery to remove a testicular tumour. Cameron Zurhaar is also under an injury cloud heading into Saturday, which would be another big blow to the improving Roos.

Joel Selwood was subbed out in round 19 with a corked thigh, but the Cats are hopeful he will make the trip to Tasmania this weekend.

The Kangaroos’ ball movement has been terrific since their bye in round 12, while the Cats have one of the best defensive structures in the competition. The Roos know their way around Blundstone Arena better than anyone in the AFL, which could give them an edge against Geelong’s elite defence.

Robbie Tarrant should return this Saturday to help Ben McKay tackle Tom Hawkins and Esava Ratugolea, but another tall Cat may get off the chain. Rhys Stanley has shared ruck duties with Ratugolea this season, allowing the former Saint to rest forward and hit the scoreboard. We think Stanley offers excellent value at $2.25 with Sportsbet as an anytime goalscorer this weekend.

Jack Ziebell and Tom Stewart have played a similar role throughout the season, as both players specialise at intercepting opposition kicks and rebounding off half-back. When the Roos and Cats met in round five, both Ziebell and Stewart recorded over 30 disposals.

Both defenders are priced around $2 to get 25 or more disposals this weekend, but we think the better choice is the North Melbourne skipper. The Roos could have trouble picking through Geelong’s tight defence, meaning Ziebell is likely to see more of the footy than Stewart.

The loss of Ben Cunnington won’t be as detrimental to the Kangaroos as some might think, as they have plenty of like-for-like replacements who can pick up the slack in midfield. Considering they lost to the Cats by 30 points at GMHBA Stadium in round five, the improving Roos should do enough to cover the five-goal line at Blundstone Arena.

Jack Ziebell to get 25+ disposals

Jack Ziebell has been a key contributor for the young North Melbourne squad since moving to the backline, where he has averaged a career-high 26 disposals per game. Even though Ziebell recorded a season-high 38 disposals against the Cats in round five, he is paying $2.25 to register 25 touches this weekend. The Roos’ captain should have no trouble passing that mark.

We think North Melbourne will cover the line this Saturday against a Geelong side that has never played at Blundstone Arena before. Jack Ziebell will play another terrific game against the Cats, while Rhys Stanley should push forward and snag a goal.