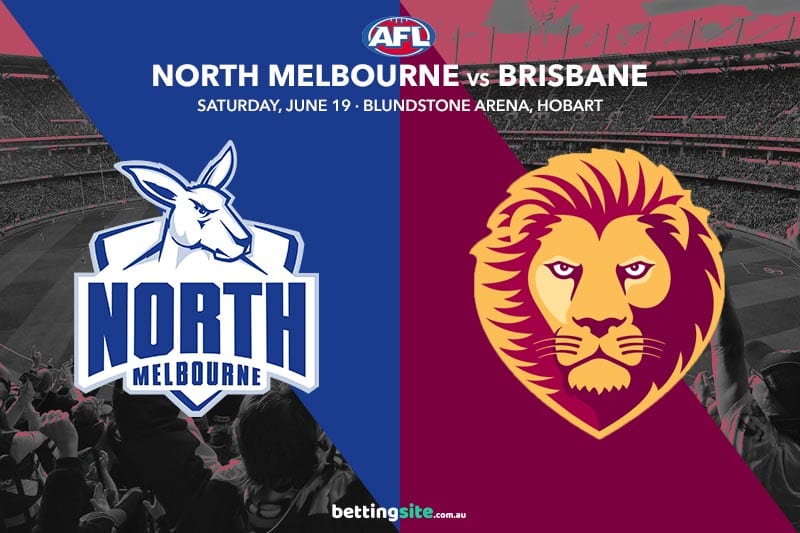 Can the North Melbourne Kangaroos produce another strong effort at Blundstone Arena this Saturday, or will the Brisbane Lions secure their ninth win of the 2021 AFL Premiership season?

The Kangaroos almost ran away with a victory against the GWS Giants last weekend, but they ran out of legs in the last quarter and had to settle for a draw.

Chris Fagan’s Lions will be fresh off the bye, but they will be without captain Dayne Zorko (suspended) and backman Ryan Lester (hamstring). Rhys Mathieson and James Madden loom as the likely replacements.

The Roos did not suffer any injuries in their tough battle with the Giants, so there is a fair chance they will enter this clash with an unchanged lineup.

This will be David Noble’s first time coming up against his old team, as the North Melbourne coach previously worked alongside Fagan at the Lions from 2016 to 2020. Could Noble’s inside knowledge help the Kangaroos this weekend?

You often expect a top-four side to boost their percentage when coming up against 18th, but the Kangaroos have been playing a competitive brand of footy in the last few weeks. The Blundstone Arena advantage will also play a huge part this weekend, as the Lions very rarely travel to Tasmania.

The Lions should get on top in the midfield even without their skipper, meaning the North Melbourne defenders will be working overtime this week. Look out for Jack Ziebell in the disposal betting; the Kangaroos’ captain is averaging 27 touches per game this season, so the $2 at Sportsbet for him to get 25 or more disposals appears to be good value.

Robbie Tarrant’s return to North Melbourne’s back six adds a touch of class and plenty of experience to the mix, but Ben McKay still has a tough task ahead with Joe Daniher his likely opponent. Daniher has kicked a goal in every game this season, although he has not kicked multiple goals since round nine. McKay needs to watch out for the hungry Daniher, who will be itching to make an impact after the Lions’ recent loss to Melbourne.

Drawing with the Giants last week was ultimately a poor result for the Roos, as they should have done enough in the last quarter to win the match. We think the Lions will take a while to find their feet after the week off, while the Hobart factor should see North Melbourne cover the line.

While Joe Daniher has proved to be be a good acquisition for Brisbane, his goalkicking still could improve. The former Bomber has booted 19.16 this season, so there is no doubt that he could have kicked three or more goals in many more matches. The Roos conceded multiple goals from three of GWS’s key forwards last week, which suggests Robbie Tarrant and Ben McKay still need time to develop their defensive chemistry.

Jack Ziebell will carry his Kangaroos this Saturday in what should be an entertaining game. David Noble will want to deal his former employers a harsh blow, but but a big performance in front of the goals from Joe Daniher will cause North plenty of headaches. You can get on these three legs at $16.75 with Sportsbet.com.au.