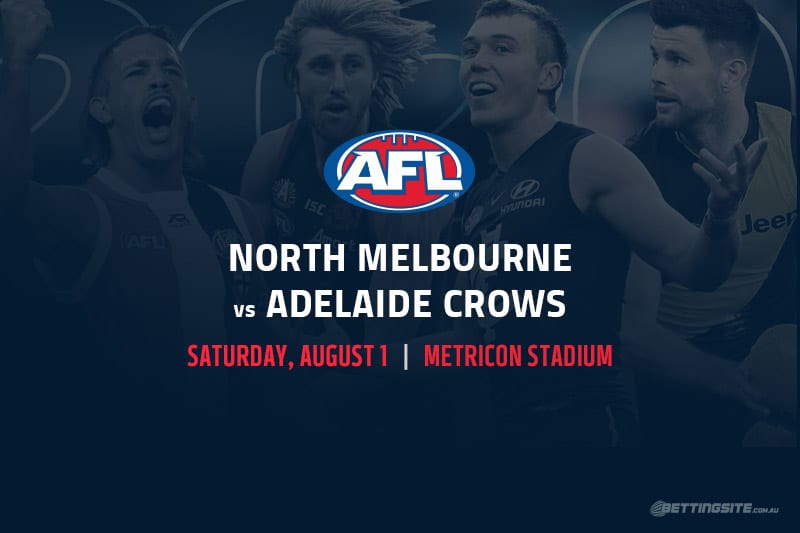 Saturday’s AFL action begins on the Gold Coast, where the North Melbourne Kangaroos and Adelaide Crows will clash at Metricon Stadium.

Both clubs will be feeling the heat coming into this match, as the Crows are winless in 2020 and the Roos have not tasted victory since round two.

North Melbourne coach Rhyce Shaw has recalled Majak Daw to the squad for his first game in two years, and his presence in defence and ability to roll forward could prove invaluable.

Adelaide gaffer Matthew Nicks has been struck hard by injuries this season, with Brad Crouch and Tom Doedee both succumbing to hamstring issues in last week’s gut-wrenching loss to Essendon.

Darcy Fogarty is back from a shoulder problem, however, and the young key forward could provide the marking target inside 50 the Crows have been crying out for.

Although they sit 17th and 18th on the AFL ladder, the Roos and Crows will provide a great contest to start off Saturday’s three AFL matches.

Classy midfielders have been having their way with the Crows, who were smashed around the stoppages by a depleted Essendon side last weekend. Higgins is the cream of the crop at North Melbourne and has put in some huge individual efforts despite his side’s poor form. Having collected 29 and 30 disposals in his last two clashes with Adelaide, we look forward to what Higgins can produce this Saturday.

With brother his Brad ruled out for a few weeks with a hamstring issue, Matt Crouch will have to take on more responsibility in the Adelaide midfield. He has surpassed 25 disposals in five of his last six games, so we know can find the footy even when the Crows are getting trounced. Crouch also amassed an enormous 46 touches against the Roos back in 2018, but we are happy to settle for the 25+ given he is yet to pass 30 in a game this season.

Since Ben Brown is struggling to get involved in matches this season, emerging forwards such as Curtis Taylor and Cam Zurhaar are starting to take on bigger roles at North Melbourne. Zurhaar has kicked eight goals this season, the equal-most alongside Brown for the Roos, but his power and speed should stand out in North’s forward line against an Adelaide defence that will lack leadership if Tom Doedee doesn’t play.

It can be hard to trust any Adelaide forwards at this point in time, but Tex Walker has lifted over the past fortnight. Kicking five goals in his last two matches, we think Walker continues to lead the line for the Crows with a couple of goals against North Melbourne this weekend. He kicked six goals and five behinds against the Roos back in 2015, so the form lines are promising for this matchup.

There is always doubt the Crows will score over the total match points. Given the Kangaroos have kicked more than 60 points in a game only once this season, we can safely rule out a high-scoring contest on the Gold Coast this weekend. Majak Daw will help dry up the scoring in the Adelaide forward line, while Ben Brown’s struggles in front of goal won’t help North on the scoring end.

The loss of Brad Crouch and possibly Tom Doedee will be too much for the Crows to cover, as their inexperienced players need support around them. Daw’s inclusion cannot be underestimated, as his best is very good. Todd Goldstein and Shaun Higgins should dominate the midfield battle as the Roos end their horror run with a comfortable win.