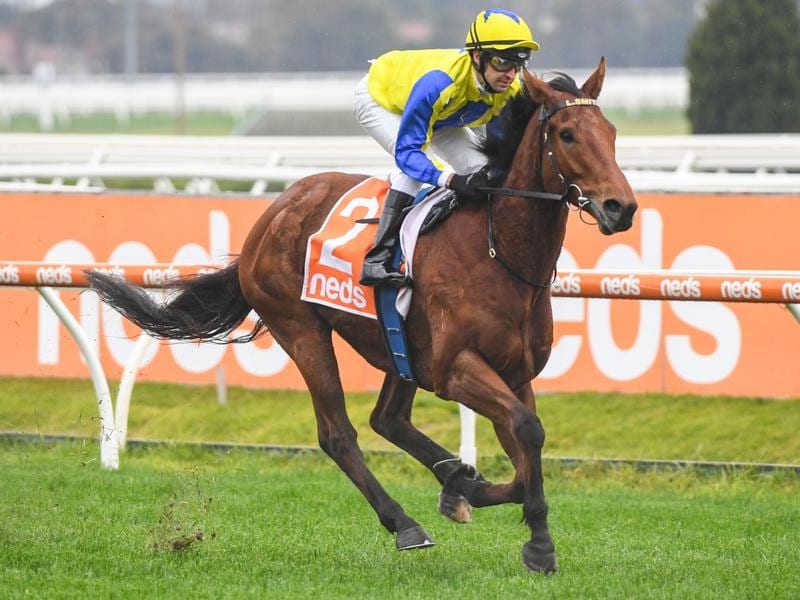 Mystery Shot continues to chalk up the wins for jockey Michael Rodd and trainer Lindsey Smith.

Jockey Michael Rodd and trainer Lindsey Smith are becoming a lethal combination after teaming for another success at Caulfield.

Since his return in May following a five-year stint in Singapore, Rodd has combined with Smith on 16 occasions, registering seven wins.

Three of those victories have been aboard Mystery Shot who Rodd guided to success in Saturday’s Neds Price Boost Handicap.

The win was the easiest of the jockey’s three rides on the gelding as Mystery Shot idled home in the final 50m to score by 2-1/2 lengths from Wicklow Town.

Connections have so far resisted offers from Hong Kong for Mystery Shot who is unbeaten after four starts.

“Let’s hope he stays on our shores,” Rodd said.

“The progression from last start to today was quite big.

“Between his first couple of starts you could see that he’s coming along, but today was a very big jump with that weight, against a nice field.

“The biggest thing probably wasn’t the quality but just the way the weights were working out against him, going from 56.5 kilos to 61.5 kilos and he went around like he had no weight on his back today.

“He got a little bit keen and wanted to go so I had to hold him together, but in the straight I was able let him down and there was obviously plenty from him.”

Shane Jackson, representing dual-state trainer Smith, said the race was an easy watch after Rodd elected to roll forward to be outside leader Scorpius.

Jackson is unsure what Smith has in store for the gelding.

“Lindsey will have a look at him during the week whether he goes for one more or gets a little break,” Jackson said.

“That’s the boss’ genius, he’ll know straight away whether he’s ready for the paddock or if he’ll have one more.”