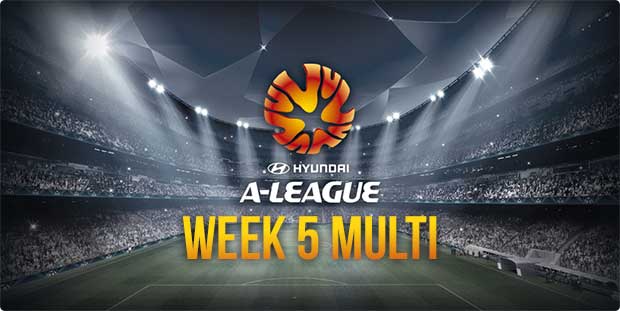 WE’RE just one month into the 2016/17 A-League season and already it looks like the Phoenix are out of contention, while Sydney FC remain undefeated at the top of the table.

Perennial powerhouse clubs, the Brisbane Roar and Melbourne Victory, are slowly working their way into the season and the Perth Glory continue to quietly achieve.

This week sees two of the A-League clubs going at each other in the Big Blue, while a Saturday afternoon showdown across the Tasman could determine who should book their post-season holiday trips a little earlier than expected.

All odds for the fifth week of the A-League season were provided by Sportsbet.com.au, which is offering punters a fantastic inducement for those yet to sign up.

Click on the link below to get in on the brilliant Sportsbet Multi Builder.

Selections for the round 5 A-League multi of the week:

The point-less Wellington Phoenix host the Newcastle Jets across the Tasman to kick off our multi this weekend.

The ‘nix were embarrassed last time out by the Melbourne Victory at Etihad Stadium on Melbourne Cup eve, allowing Kevin Muscat’s men to put six goals into the back of the net.

Wellington currently sit anchored to the bottom of the ladder and is the $3.75 second favourite for the wooden spoon at Sportsbet.com.au.

Not much was expected of the Jets this season, but after a solid 2-2 draw against the Wanderers and a highly impressive win against the Roar, a finals berth may not be out of the question.

Newcastle may have been the better performed side of the campaign so far but the attacking prowess of the Phoenix should rise to the occasion on Saturday and hand Wellington their first win of the year.

The Big Blue is the second game of the multi this weekend, and we are expecting a ferocious battle on Saturday night.

Sydney FC is unbeaten after the opening month of football and look to be the best team in the league by a considerable margin.

The Sky Blues last win was a professional 2-0 victory over the Jets away from home which moved them into sole favouritism for the title at Sportsbet.com.au at a price of $4.

After a shaky start to the season the Victory have hit top gear.

While City remain $4.33 for the title and Victory at $7 at Sportsbet.com.au, Melbourne may have two title contenders this season.

Sydney FC’s current form cannot be denied and only a madman would bet against them – and that will not be us this weekend.

The Sky Blues should reign supreme in the Big Blue.

Last year’s champions Adelaide United host this year’s favourites for the wooden spoon the Central Coast Mariners in a match that on paper looks to be a formality.

The Reds have lost their last three matches in the A-League but were in positions to win each of those matches. Lazy defending at critical moments has cost them dearly.

The Mariners are yet to win a game this season but have displayed a determination that was not there at times last season, grinding out draws against quality teams like the Wanderers and the Glory.

The Reds have had plenty of time to regroup after their disappointing loss to City last week and should be ready and raring to go against one of the league’s weakest squads.

Adelaide should get off the mark this weekend.

Final game of the weekend sees the Glory hosting the Wanderers in the west of the nation to close out our multi.

The Glory were unlucky losers against the Roar last weekend, going down 2-1 in a game they could have ultimately won.

Before that Perth had won their last two games in the league and looked to be legitimate title contenders.

The Wanderers have just two points from their last two games, which may not sound so bad, but when you consider the opposition was the Newcastle Jets and the Central Coast Mariners it is hard to get excited about their prospects in this one.

The Perth Glory should finish off our multi in style.

A-League Promotions for Round 5

It is a huge week of footballing action across the globe this weekend which means punters have a multitude of options for the multis.

For those who are sick of going down by one leg you are not alone, but luckily the betting agencies are back and they have plenty of multi insurance deals for this weekend.

Sportsbet.com.au’s multi insurance deal extends to all the top-tier competitions, so punters will be able to unload on a multi knowing if one leg fails they will not be out of pocket.