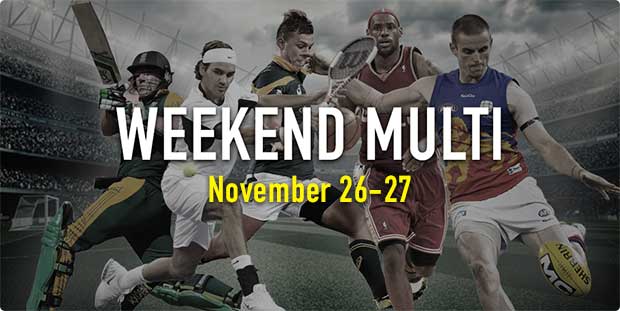 SUMMER is just around the corner in Australia, which means all the winter codes from the opposite side of the globe are about to hit top gear.

The Premier League and NFL are deep into their seasons, the NBA is ramping up and the NHL is starting to get into its groove.

Don’t forget the summer sports that are taking place down under, which includes group racing from across the country and the cricket which is about to hit fever pitch given the Big Bash League is just around the corner.

There is plenty of sporting action to choose from this weekend so we have pieced together a multi that encompasses four of our best bets across four different codes to bring you the best possible dividend.

All odds for this weekend’s action were provided by Sportsbet.com.au, who is offering punters a fantastic incentive for those yet to sign up.

Selections for the November 26-27 weekend multi:

Terravista to place in the Winterbottom Stakes ($1.45)

The second group 1 race of the Perth summer racing carnival is the $1 million Winterbottom Stakes.

We think there are two clear standouts in the race in the form of Darley Classic-winner, Malaguerra and our selection, Terravista.

Terravista brings tremendous form into the race after finishing second upon resuming three weeks ago. The gun sprinter is fitter for the run, but will still be fresh second up.

The seven-year-old draws ideally from gate five and will camp just off the front runners and will unfurl his customary dash when the time is right.

The $1.45 to place is too hard to ignore and we’re happy to take the price heading into the first leg of our multi.

Terravista to place in the Winterbottom Stakes – $1.45


Warning: count(): Parameter must be an array or an object that implements Countable in /home/bettingsite/public_html/wp-content/plugins/Odds-Compare-13/vendor/guzzlehttp/guzzle/src/Handler/CurlFactory.php on line 67

The winless Reds travel to Sydney to face the undefeated Sky Blues in a match that could get very ugly for the visitors.

The Sky Blues’ winning streak came to an end last week, but they are still undefeated this campaign after drawing 1-1 alongside the Roar.

Sydney FC remains the clear cut $3.75 favourite for the title despite the minor hiccup.

Adelaide’s winless streak rolled into another round last week after the Reds went down 3-1 to the Glory away from home.

The Reds’ nightmare season could potentially run into the second month of the season and Sportsbet.com.au think their title defence may be in tatters, moving Adelaide to $15 for this year’s trophy.

This was one of the easiest legs to predict this weekend. Sydney should win this in first gear.

We’ve got a London derby for the third leg of our multi this weekend as the Spurs and the Blues clash at Stamford Bridge.

Chelsea is on fire and is showing no signs of slowing down after recording a sixth straight win on the weekend.

Tottenham has had an sporadic campaign so far, but its sensational come-from-behind win against West Ham last weekend could provide the spark the Spurs need to continue their climb towards the top two.

Unfortunately for the Spurs, they will have to overcome not just the best team in the league, but an overwhelming head-to-head record that goes against them.

Chelsea has dominated Tottenham over the last six years. The Blues have lost just once against the Spurs since April of 2010.

Chelsea should guide our multi into the final leg.

The Cardinals and the Falcons round out our weekend multi in the early hours on Monday morning and the battle of the birds presents an interesting contest given what is at stake for both sides.

The Cardinals lost by six points to the Vikings last weekend and are in serious danger of missing the playoffs.

The Falcons are fresh off the bye and should be ready to go against a team they have dominated at home in recent times.

Atlanta has won its last seven home games against Arizona and there is no reason why it can’t make it an eighth.

The Falcons should keep their push for the NFC South title alive, whilst condemning the Cardinals to a tough road just to make the playoffs in the process.