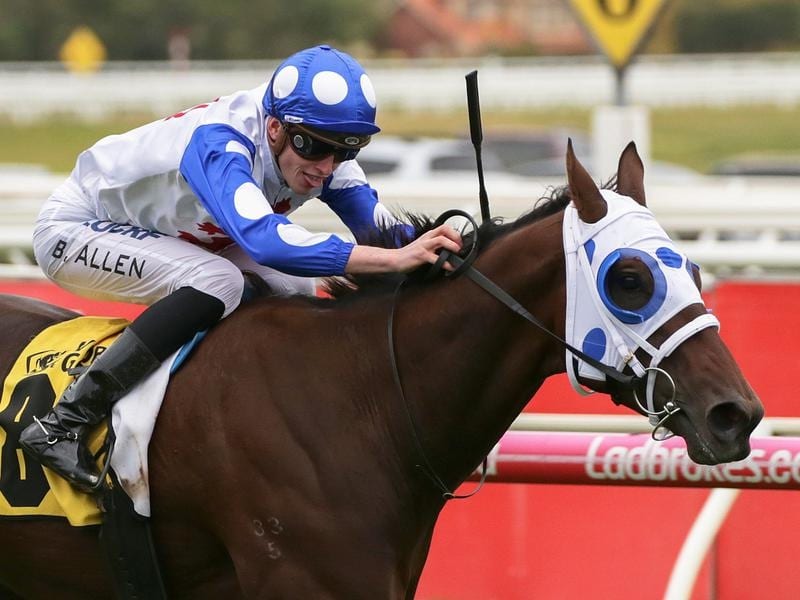 Mr Quickie has pleased trainer Phillip Stokes in a right-handed work-out ahead of the Qld Derby.

In-form jockey John Allen has put Mr Quickie through his paces in a last piece of serious work ahead of the Queensland Derby.

Allen went to Pakenham on Monday to work Mr Quickie over 1600m before the gelding flies to Brisbane on Tuesday.

Mr Quickie will be attempting to give Allen a fifth Group One win for the season when he runs in Saturday’s 2400m-race race at Eagle Farm.

Trainer Phillip Stokes said he was content to head to Brisbane with Mr Quickie after the gallop.

“John Allen came down and galloped him this morning with a mate,” Stokes said.

“He cornered well and did everything nicely going in the right-hand direction on the course proper here at Pakenham.”

Formerly trained by Darren Weir, Mr Quickie has won three of his five starts since joining Stokes’ yard and was a last-start third in the Group One South Australian Derby at Morphettville on May 11.

“He’s still got to travel up there tomorrow and hopefully that all goes well,” Stokes said.

“He’ll stay on course at Eagle Farm. We’ll get him settled and hopefully he can have a cruisy week until the race on Saturday.

“We preferred to give him all his work at home on surfaces that we know and hopefully that will all pan out.”