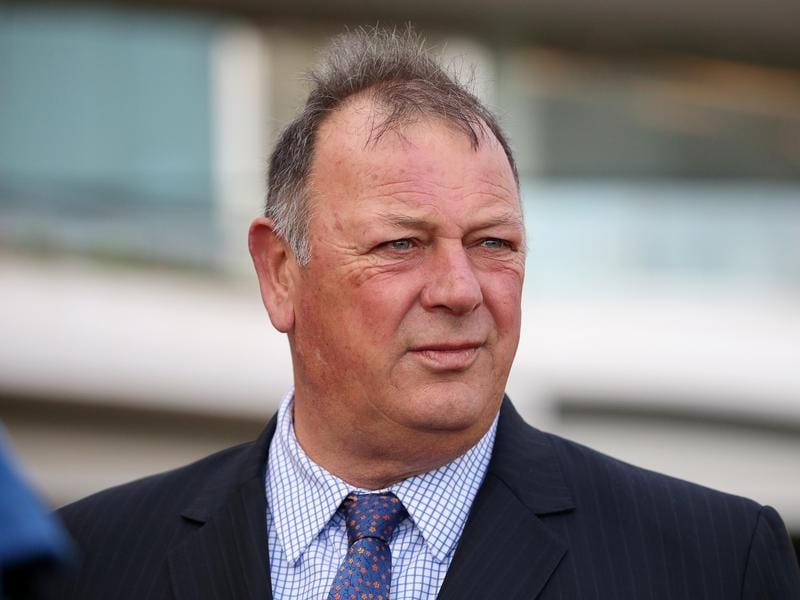 Trainer Mike Moroney will test Wham at 2000m at Flemington to determine whethe he gets a distance.

Trainer Mike Moroney is happy to extend Wham out in distance to find out once and for all what the gelding’s range is.

Wham is set to run in Saturday’s Mahogany Challenge at Flemington, his first attempt at 2000 metres.

He holds a nomination for next month’s Group One Queensland Derby and Moroney has reservations about him at 2400m.

But he is prepared to give the three-year-old his opportunity on Saturday as a potential stepping stone to the spring.

A first-up winner over 1212m at Sale in March, Wham has had three subsequent runs, the latest a strong finishing second to the highly regarded Tarwin in the VOBIS Gold Sires at Caulfield on April 27.

“I think he’ll have this and possibly go for a break,” Moroney said.

“I’ve got my doubts about him getting even the 2000 metres even though he’s a Fiorente, he’s out of a Starcraft mare and is a bit more brilliant.

“But in saying that this time around he’s starting to pick it up and he might eventually run more to his breeding.”

Moroney looked at Wham as a potential Victoria Derby contender last spring but sent the gelding for a spell after five runs.

The trainer felt Wham did not run the trip of the Victoria Derby Trial at Flemington in September.

“In the spring when we tried him at 1800 metres he didn’t get it at all, so he’s on trial at this trip,” Moroney said.

“Another six months on, he’s strengthened up a bit, so we’ll give him this opportunity to find out whether he can stay.

“That way we can then tip him out for the spring and plan a path.”