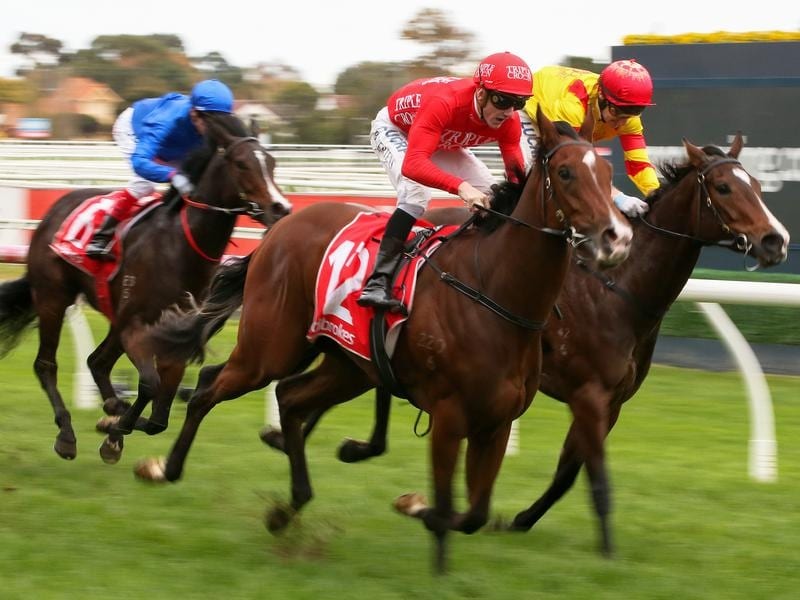 Missile Mantra has made the leap from country maiden success to stakes race winner, storming home to claim the Vale Redoute’s Choice Stakes at Caulfield.

Ridden by Beau Mertens, Missile Mantra was backed into $4 favouritism before scoring a three-quarter length win from Grand Scholar ($26) with Express Pass ($26) coming from last, a further 1-3/4 lengths away third.

Trained by Sydney-based Peter and Paul Snowden, Missile Mantra has done most of her work at their Melbourne base under the supervision of Andrew Angelone.

Angelone said the two-year-old was a slow maturing filly and unsure what the immediate future holds.

“Obviously there’s options elsewhere but it might be time to tip her out and bring her back for options later on,” Angelone said.

“But she’ll tell us when she’s had enough.

“She eats the bin and just thrives so she might be right to push on, but if she looks like she’s not going on we can tip her out.”

Angelone praised Mertens after the jockey switched the whip to the left hand, just as he did when successful at Ballarat.

Mertens has been riding in good form after finding the transition from an apprentice with a claim to senior ranks a trying time in the past two years.

He said continued hard work was beginning to pay dividends.

“There’s a lot of jockeys around and I’m trying to keep myself as busy as I can,” Mertens said.

“Things have been going really well in the last month or two, so hopefully I can keep it going.”

Mertens sees a bright future for Missile Mantra, saying the filly was better behaved on Saturday than when successful at Ballarat.

“I thought she was playing with me a bit but once I swapped the stick over to the left she picked herself up and thought ‘OK lets go’.

“She’s only going to improve and next prep she’ll be a lovely, lovely horse.”