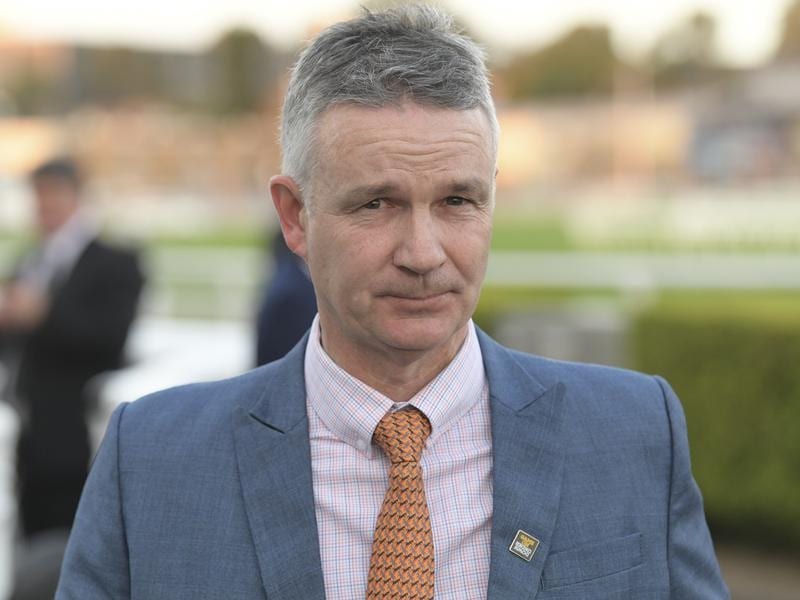 Trainer Matthew Smith will send out another of his overseas acquisitions, Milk Man, at Randwick.

Warwick Farm trainer Matthew Smith is quickly gathering a reputation with imported horses and is ready to unveil another one at Randwick.

Milk Man will have his first Australian start on Saturday with Smith uncertain whether he will run him in the 1600m-race or over 1300.

“I’ll see how he works in the morning and will talk to (jockey) Nash Rawiller but I will more than likely throw in a late nomination for the 1300-metre race,” Smith said.

“He is a very nice horse but we are still learning about him which is why he’s had four trials.

“He kept getting better and then when we put blinkers on him for his latest trial, he turned a corner.

“He is still a colt and some of these imported horses take longer than others to acclimatise.

“Once I saw how he went in the blinkers, I decided he was ready to go to the races.

“We just aren’t sure yet what his distance range is.”

Milk Man’s form in France under Carlos Laffon-Parias includes two 2100m-wins and a third in a 1900m-race in April 2017 won by Avilius who fulfilled his destiny as a dual Group One winner for Godolphin in the autumn.

Milk Man is one of 13 entries for the Benchmark 88 Handicap (1600m) while there were seven nominations taken on Monday for the August Handicap (1300m).

Two other Smith-trained imports, Invictus Prince and Sweet Thomas, will run in barrier trials at Randwick on Tuesday.

Smith will also welcome another import of a different kind when leading Brisbane apprentice Jag Guthmann-Chester joins the stable this week.

“Jag wants to come to Sydney and give it a try,” Smith said.

“He has ridden plenty of winners in Queensland and I have watched him ride and he rides well.

“We expect him here on Thursday and he will have rides for the stable from next week so we’ll see how he goes.”