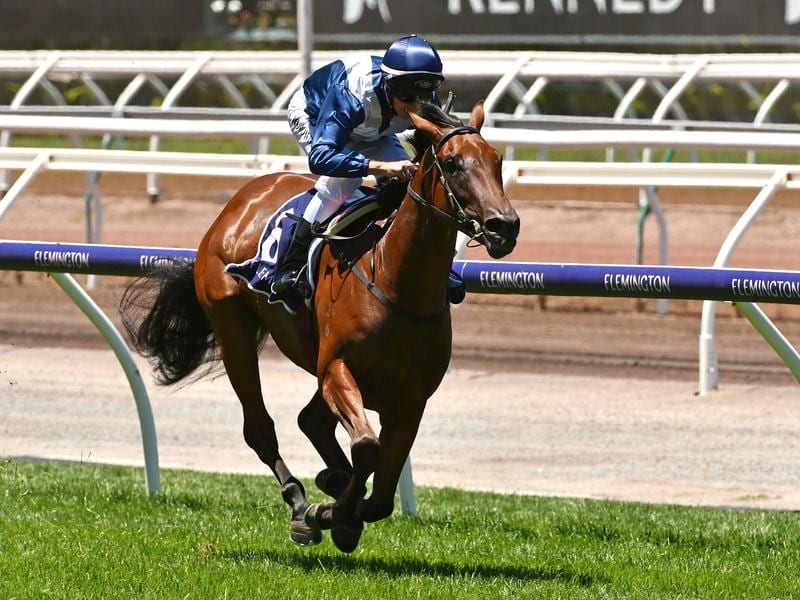 Flying filly Jedastar is ready to make her return at The Valley for trainer Lloyd Kennewell.

Speedy filly Jedastar will be out to make an immediate impact as a three-year-old on the opening weekend of the new season at The Valley.

Trainer Lloyd Kennewell is set to run Jedastar first-up in Saturday’s 1000m-handicap for three-year-old fillies while stablemate Asateer is poised to make his first city appearance in the 1000m-race for three-year-old colts and geldings.

Jedastar sprinted to victory on debut at Flemington on January 1 before finishing second to Catch Me in the fillies Blue Diamond Preview (1000m) at her second start.

Kennewell then tried the two-year-old in the Group One Lightning (1000m) against older horses in February at Flemington but after beginning awkwardly Jedastar failed to beat a runner home.

Jedastar has had three jump-outs at Caulfield to ready her for her first-up assignment.

“She seems like she’s not far off her peak at all and I think she’ll obviously give them something to catch on Saturday at The Valley.

“We’re going one race at a time but we obviously want to get through The Valley in one piece and make sure she runs a super race there, and all being well two weeks later she flies into the Quezette Stakes.”

The Group Three Quezette (1100m) for three-year-old fillies is on her home track at Caulfield on August 17.

Saturday is also a chance for Kennewell to test Jedastar at The Valley as the Group One Moir Stakes (1000m) is on his radar as a longer range option should the filly keep stepping up.

The 26 nominations for Saturday’s race include unbeaten Tasmanian filly Mystical Pursuit who is a close relation and stablemate to star filly Mystic Journey.

Asateer finished second to subsequent stakes placegetter Yulong Savings on debut at Bendigo in February and the colt has returned this preparation with back-to-back wins at Pakenham and Ballarat on synthetic tracks to earn his shot in town.

“He’s the first horse I’ve had for Sheikh Bin Khalifa and he’s a nice horse to kick off with for me,” Kennewell said.

“He beat the older horses the other day and now he’s dropping back to three-year-old grade with 54 kilos. I think the horse possesses pretty good talent and definitely tries really hard.”