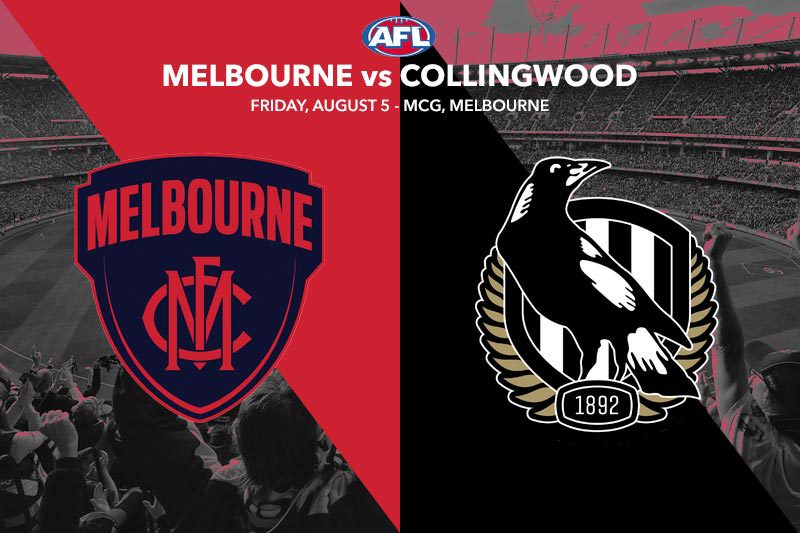 Top-four spots are on the line this Friday night as Melbourne host Collingwood at the MCG in a blockbuster to kick off round 21 of the 2022 AFL season.

Melbourne returned from their WA clash with Freo with their fearsome reputation somewhat rehabilitated. The Demons dominated the hapless Dockers in a one-sided beatdown. Despite not hitting the magical 100 points, Melbourne’s defence held Freo to a miserly 39 points and the Dockers never looked like breaking free.

Melbourne supporters will be relieved to see this return to form after some patchy performances against the Cats, Dogs, and Power. While the finals series may go in any of several directions, Melbourne and Geelong dominate the betting for a reason – their best efforts are a notch above the rest of the league.

The Magpie miracle workers continued to produce the goods in round 20, and their improbable winning streak now stands at 10. The six-point victory over the Power catapulted Collingwood into the top four, and a win here against the reigning premiers would send the Magpie army into overdrive.

Let’s not forget that Collingwood won six games in 2021. The transformation under new coach Craig McRae has been a sight to behold. They have unearthed serious new talent and play like a team unbound by endless whiteboard-diagram complications. They have obviously been fortunate along the journey but have wildly surpassed all pre-season expectations to date.

Melbourne midfielder Jack Viney was the key architect of the win in WA. The former skipper grabbed 33 disposals, four clearances, and laid six tackles. With Clayton Oliver still nursing his broken thumb, Viney has stepped up to provide the centre grunt. Viney has had a stellar season – averaging 26.6 disposals, 4.6 clearances, and 5.8 tackles per game – and will be crucial to the Demons’ premiership aspirations.

Collingwood star Jordan De Goey can appear a lost soul on occasion, but he turned up with a big game in round 20. The soon-to-be free agent grabbed 23 disposals, five clearances, and booted two crucial goals in the narrow victory. De Goey has posted solid 2022 numbers, averaging 20.9 disposals and 4.6 clearances per game. With clubs lining up for his signature, De Goey might be ready to unleash his career-best form.

The Demons go in as warm favourites here, but if you don’t mind short odds, the online bookies have dangled the carrot. The line is also set at a temping 15.5 points. Can the Magpies possibly work another miracle here? We think not. In fact, this game might get a little ugly. We have watched the Demons closely to see if they possessed another gear, and it looks like they do, and this may prove too much for the plucky Pies. We will be backing Melbourne -15.5 with some confidence here.

For the value hunters, we are linking Melbourne -15.5, into Jack Viney 25+ disposals, into Christian Petracca 2+ goals. This triple-header will return an attractive $5.62 courtesy of Ladbrokes.