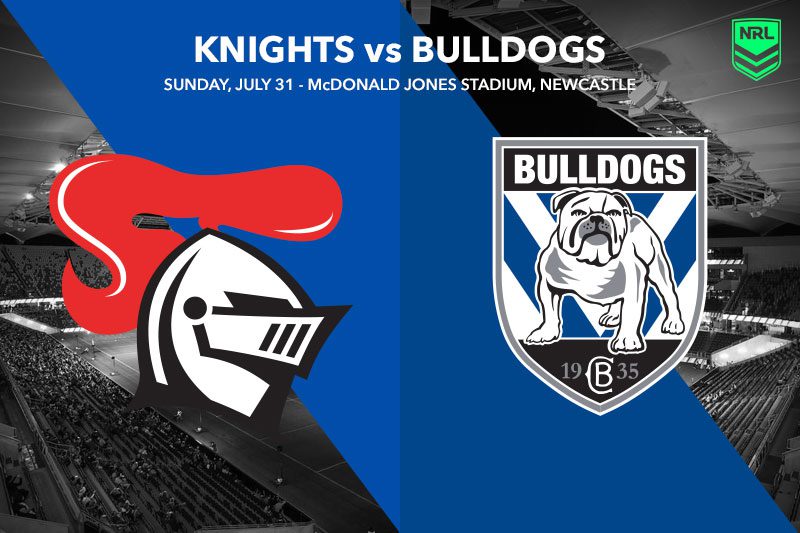 The Canterbury Bulldogs will attempt to keep their NRL finals hopes alive when they travel north to take on the Newcastle Knights at McDonald-Jones Stadium on Sunday.

The Knights find themselves in the bottom four on the competition ladder having been at the summit early in the season.

The Bulldogs need some results to go their way, but cannot be ruled out of making a late push for the eighth spot in the finals. The Bulldogs have won three of their last five including beating the Eels but need to continue this upward trajectory to make the finals.

The Knights have been ravaged with injuries losing Lachlan Fitzgibbon and Kalyn Ponga to a shoulder injury and concussion issues respectively. Dominic Young is named in the reserves and could make a late switch to the starting side in place of Hymel Hunt.

For the Bulldogs, Raymond Faitala-Mariner is out with a rib injury. Corey Waddell will also be out of the starting side following his suspension for eye gouging against the Titans. Tevita Pangai Jnr is expected to come into the starting side, although this is yet to be confirmed.

A relationship unlike any in the NRL is forming at the Bulldogs, as Matt Burton and Josh Addo-Carr are always combining to score tries on the left-hand side of the field. Whether it be from kicks behind the opposition defensive line or set plays to get Addo-Carr in clear space on his edge, they always have a way of finding the in goal area. Look for Addo-Carr to be the first try-scorer in this match at a price of $7.50 with Australian online bookmakers, as well as going on to score 2+ tries in the match at $3.90.

Jake Averillo has been a revelation for the Bulldogs at fullback since switching there this season, scoring six tries in four games to go with six tackle busts and six offloads. Not only is he brilliant as an extra playmaker in shape for the Bulldogs, but his support play allows him to find tries on the field that otherwise aren’t there. Averillo is a great value play to score a try at any time paying $2.25.

The battle between these two five-eighths will be a very interesting one as they have a lot in common in their style of play, as well as many differences. Both Burton and Milford have exceptional short kicking games to go with strong running games that makes them very dangerous threats close to the try line. For Burton, it’s his size and power that makes his running game so damaging, while Milford’s footwork and illusiveness makes him incredibly difficult to tackle. The man with more time spent inside the opposition 20m line should have more opportunities to create scoring chances for themselves and those around them, which will go a long way to winning this match.