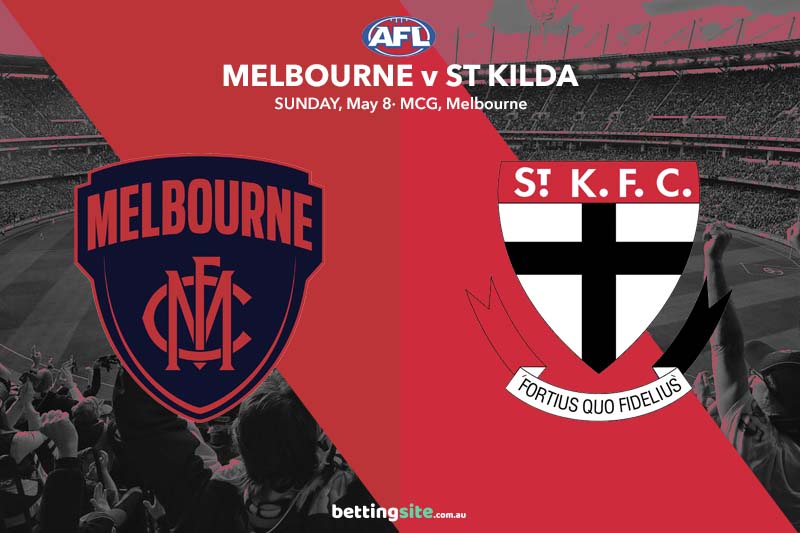 Can Saint Kilda bounce back after a horror night in Cairns, or will Melbourne remain undefeated following Sunday’s round 8 clash at the MCG?

The Melbourne juggernaut rolls on and the question remains – can anyone beat the reigning premiers in 2022? The Demons were forced to work for their 10-point victory over the Hawks but looked to in control throughout the match. This is the Melbourne way – winning without undue exertion. The Demons know there’s a higher gear just waiting to be activated should their opponent get too close. While there is risk involved, this strategy has proven bulletproof during this campaign. The Demons are hot favourites with online bookmakers to secure back-to-back flags at this early stage of the year.

Saint Kilda was involved in one of the ugliest games of AFL ever played in round 7 AFL action. How does a top four team kick 4.18 and lose to a bottom four side who kicks 5.13? The weather might have been hot and sweaty, but fans deserved a refund having sat through four quarters of shared ineptitude. Prior to this diabolical display, we were happy to ride the Saints and take the generous odds being offered. Early season expectations were being surpassed. This game will be the acid test though, and the Saints will need to bounce back hard, play their best footy, and kick a decent total.

Key Match-up
Fans of midfield battles are in for a treat here as we will watch some of the best in the business strut their stuff. Melbourne midfielder Christian Petracca is a prodigious talent who is averaging 29.9 disposals per game in 2022. He is almost impossible to shut down, especially when defensive attention is drawn to his midfield partner Clayton Oliver. Petracca just never seems to have a cold game, as the statistics would suggest. St Kilda mid Jack Steele, and Brownlow Medal fancy, is averaging 28.4 disposals this season, but also makes 7.1 tackles per game, In contrast, Petracca averages just 2.6 tackles per game.

The line has been set at a skinny 19.5 points here, due largely to Melbourne’s tendency to cruise to the finish line. It often appears they could put a wide margin on their opponents but choose to do enough to secure the premiership points. Can the Saints bounce back after their unfortunate trip the Cairns and make this a close game? We’re tossing up between Melbourne 1-39 and the Saints +19.5. We ended up making Melbourne 1-39 our official Demons v Saints tip here due to the extra scoreboard coverage offered. The Saints should be stung into action, and a blow-out looks unlikely. Melbourne to win 1-39 is currently paying $2 on Neds betting.

For the value hunters we will link Melbourne 1-39, into Bayley Fritsch 2+ goals, into Jack Steele 25+ disposals. This triple header will return $4.14 courtesy of Ladbrokes. The game should be cracker, and this multi will add some icing to the cake.