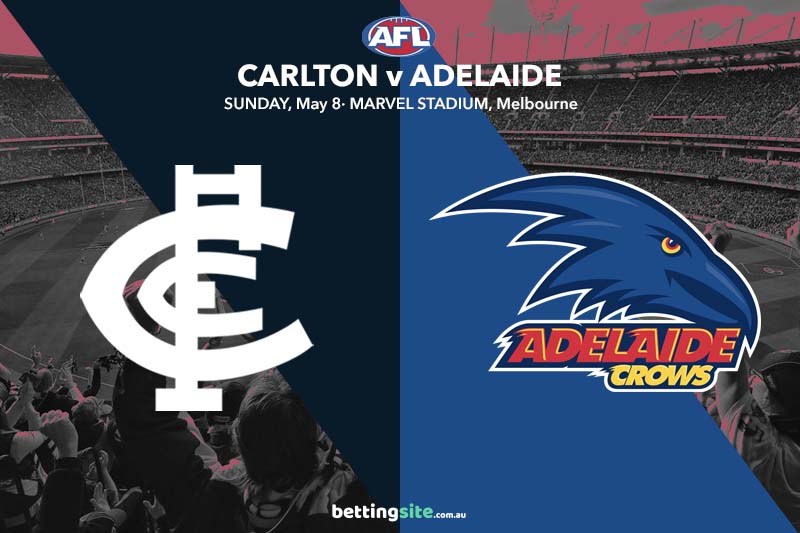 The red-hot Carlton Blues will look to secure their sixth win of the AFL season when they host the Adelaide Crows at Marvel Stadium on Sunday night.

If you disregard the Crows’ most recent loss to the GWS Giants in round seven, they come into this contest in very good form, having beaten the Richmond Tigers and Western Bulldogs.

It will be a worthy challenge for the Blues, who enter this game having only dropped two contests in the first seven weeks of the AFL season, while they are also fresh off a 50-point victory over North Melbourne.

George Hewett did not do enough during the week to overcome his calf issue, but former Giant Zac Williams has been included in the squad following an Achilles injury.

Senior coach Matthew Nicks will sit out this contest for the Adelaide Crows after entering isolation, but that did not stop the head coach from swinging the axe during the week.

Matt Crouch is easily one of the Crows best midfielders, yet he was omitted during the week for what we can only guess was his poor defensive efforts.

It will take a very impressive effort from the Crows to get over the line, but it is not beyond them after seeing two huge upsets over the Bulldogs and Tigers in the last month.

The two big key forwards are going to be the most important players on the ground under the roof at Marvel Stadium. Harry McKay is not kicking as many goals as he did in last season’s Coleman Medal year, but he is still tearing apart opposition defences with his stick hands and tireless work rate.

Even at the age of 32, Taylor Walker is still easily one of the most influential players on the park each week, which is exemplified by his league-leading average of 3.5 goals per game so far in 2022. Walker loves to get up the ground and use his pinpoint field kicking as well, making him a valuable forward even when he isn’t accurate in front of goal. Look out for these two forwards to grab the game by the scruff of the neck this Sunday and lead their respective side to victory.

Carlton Blues to win by 40+

Coming off a 50-point victory against the Kangaroos in round seven, the Carlton Blues are primed for another strong showcasing at the elite level, with the visiting squad looking like a perfect percentage-booster. The loss of Brodie Smith through concussion is another huge loss for the Crows, who may struggle to move the ball out of defence. Look out for a very one-sided affair at Marvel.

Carlton Blues to win by 40+

We think the Blues are going to win by a fair margin this weekend, and their full forward should be the one to kick a majority of their score against an inexperienced defender in Jordan Butts. McKay has the height and strength to outwork Butts around the ground, while swift ball movement through the midfield should lead to some easy goals inside 50. We think the $1.98 on offer at Australian bookmakers is as close to a lock as you can get this weekend.

Same game multi: 3 legs @ $8.51 with Ladbrokes
Patrick Cripps has been one of the best players in the competition this season to date, and we believe he will lead the Blues to another big victory this weekend, with Harry McKay to also kick a mini-bag of goals.