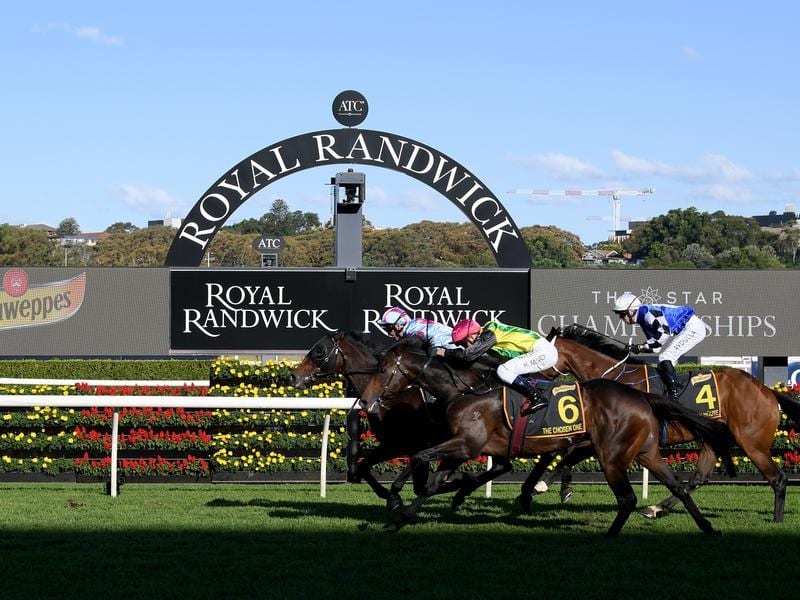 Sydney Cup runner-up The Chosen One (yellow) will be set for another tilt at the Melbourne Cup.

Australian Derby winner Quick Thinker and stablemate The Chosen One, runner-up in the Sydney Cup, will spell in Australia with the spring in mind.

Their New Zealand trainers Murray Baker and Andrew Forsman have been forced to watch them from afar as they competed at the autumn carnival because of coronavirus restrictions on travel.

Quick Thinker backed up his Tulloch stakes win with victory in the blue riband on April 4 and on Saturday The Chosen One got within a long head of Etah James in the Sydney Cup on an unsuitable heavy Randwick track.

“It was obviously a very testing track and I was actually surprised how well he performed on it,” Forsman said.

“In the end, the track conditions probably cost him. The winner had a two kilogram pull in the weight and probably got through the ground a bit better than he did but all things considered, it was a very brave run.

“He will stay based in New South Wales and go back into work in early June.”

Baker’s son Bjorn is a trainer in Sydney and has been looking after the pair.

“Bjorn has sorted out a place for both our horses to go and obviously as things stand, there is no point making plans for bringing them home because we want to campaign them in Australia in the spring anyway,” Forsman said.

“We will give them a spell and when they go back into work we will look to send a staff member across to oversee things.”

Forsman said the Melbourne Cup, in which he was unplaced last year, would be a priority for The Chosen One with the likelihood of a reduced European presence.

“Another year under his belt and a more mature horse, I think he will be much better off,” he said.

“With that placing in the Sydney Cup, it should go a long way to getting him in to a Melbourne Cup, especially given there might not be as large overseas presence as there has been in the last few years.

“It will probably be an easier race to get in and probably more winnable too.”