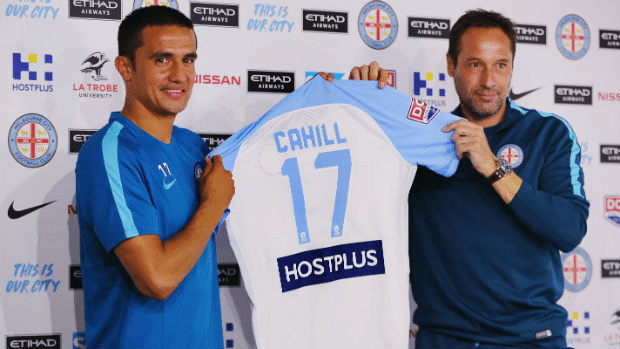 MELBOURNE’S City’s odds to win a maiden A-League title have been slashed to $5.50 at Sportsbet.com.au after confirmation Socceroos star Tim Cahill will be among its playing ranks next season.

City moved alongside the former standalone favourites the Perth Glory at that quote, coming in from the $6.50 mark that was set prior to his arrival.

Speaking at his first press conference after his first training session as a member of the City squad, Cahill said the next phase in his career is less about money and more about the next ‘challenge’.

“I’m looking forward to it because I think as a footballer I could probably stay in China and coast through (until the end of my career), but I think this is going to be a good challenge as well personally.”

Cahill believes he will be able to hit the ground running as an A-League player, and the former Everton man was impressed by the professionalism of the City setup.

“I’ve had all the run down on every single player, I’ve watched a lot of video I’ve had to learn the way they play.”

“The culture’s good here, the professionalism I have to say is on a different level.

Although Cahill said the clubs in China ‘threw everything’ to keep him in Asia, in the end there was only one factor that mattered in his decision – family.

“My little boy just said to me ‘Dad, it’s not the right move for my football if we stay in China’

City’s next competitive game is against NPL team the Brisbane Strikers on the 24th of August, but Cahill is unsure if he will be ready to take to the pitch after a spell on the sidelines.

“I don’t have a clue to be honest, you’ll have to ask the doctors,” Cahill said.

It is not often a player who has the star power – who is still somewhat close to peak form – of Tim Cahill graces the A-League.

As such, WilliamHill.com.au have duly provided punters with no less than 11 different Cahill markets for not only the upcoming A-League season, but also for his international career.

Punters who think the great man can score ten or more goals in this debut A-League season can get a $2.40 return, while the likelihood of Cahill scoring five or more headed goals has a $2.75 price.

Punters can get the same $2.75 price for Cahill to score on debut.

Can Cahill’s Australian return be an auspicious one individually?

Punters can get a $21 return on the Socceroo to win the Johnny Warren Medal in his debut season, while his odds to be the league’s top scorer are a little bit leaner at the $13 price.

For Cahill to win the golden boot and City to win the title, ambitious punters can get $51, and if they believe he can guide Melbourne to the Grand Final investors can get an $8 return for him to score on the big day.

As for Cahill’s international career, William Hill is unsure that the former Toffee will make it through to 2018.

To Win the Johnny Warren Medal

To Score On Debut

To Win the A-League Title

To Score In the Grand Final

Tim Cahill to score in the A-League Grand Final – $8

To Play For Australia In The 2016 Confederations Cup

To Play For Australia In The 2018 World Cup Finals