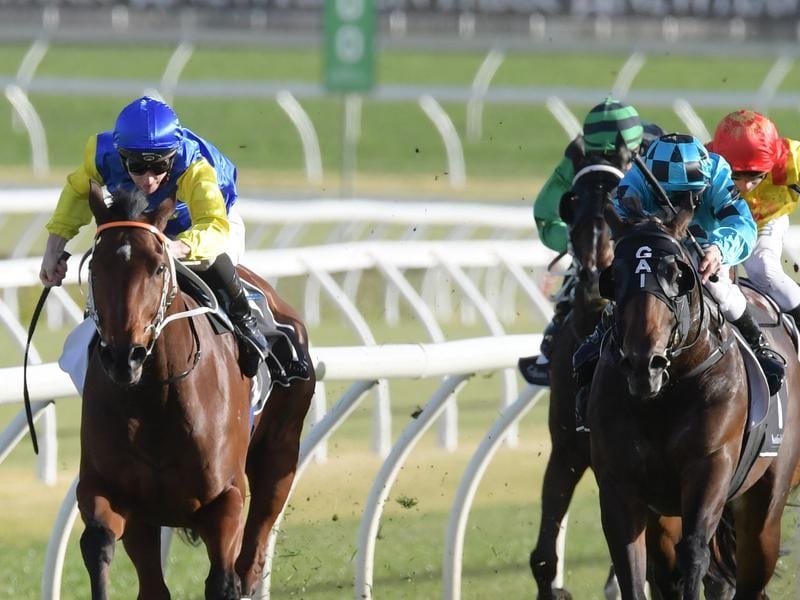 Trainer Kris Lees is leaning to Le Romain (l) as the best of his two runners in the Missile Stakes.

Sentimentally, Kris Lees would love to see history repeat itself in the Missile Stakes but realistically, he does not expect it will.

Lees will saddle up two of the five runners in the Group Two sprint, Invincible Gem and Le Romain, who ran one-two in the corresponding race two years ago.

The pair have both pleased their trainer in preparation for Saturday’s first-up assignment at Rosehill but the presence of Godolphin’s classy mare Alizee, who had the measure of Le Romain in the autumn, means Lees will be satisfied with competitive performances.

“At their best, there’s not a lot between my two but I’m very respectful of Alizee and even Vegadaze, he looks a real up-and-comer,” Lees said.

“Alizee and Le Romain have met a couple of times and she’s always beaten him, so I don’t know if he’ll turn the tables at seven, but he’ll run well.”

Bookmakers also favour Alizee and have installed her as odds-on favourite to land her ninth win and press her claims for Godolphin’s slot in the $14 million The Everest.

Le Romain sits on the second line of Missile betting, ahead of Vegadaze and Invincible Gem with Dissolute the rank outsider in the five-horse field at triple-figure odds.

The Lees-trained pair are both proven first-up performers and while he leans to Le Romain as the better chance, he is the first to concede he does not always get his assessments right.

“On their trials I’d say Le Romain of my two, but I said that two years ago and got it wrong,” Lees said.

While Alizee and Vegadaze will both use Saturday’s Missile Stakes to showcase their claims for an Everest slot, the race is not prominent in plans for Le Romain or Invincible Gem.

Le Romain will run in the Winx Stakes at the end of the month before connections weigh up their next move, while Invincible Gem will head towards the better mares races in either Sydney or Melbourne.

But in the wake of Le Romain’s belated Everest call-up 12 months ago, Lees has learned anything can happen.

“I’d say it’s probably highly unlikely for either. There’s not many slots left so I wouldn’t expect them to be in too great a demand,” Lees said.

“But neither was Le Romain this time last year and he ended up running fourth, so you never know what happens with a bit of attrition.”