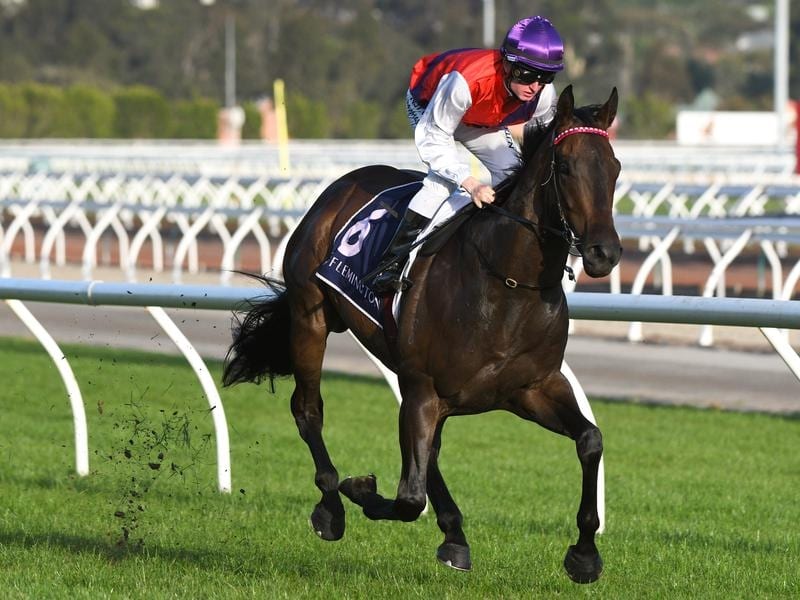 Three-year-old King Of Hastings will take on his own age in the AR Creswick Stakes at Flemington.

King Of Hastings will be out to deliver on a winter plan in the AR Creswick Stakes at Flemington when he drops back to racing against his own age for the first time this preparation.

The Anthony Freedman-trained King Of Hastings is the early favourite for Saturday’s Listed race for three-year-olds over the straight 1200m having been narrowly beaten by in-form Prezado at Flemington first-up last month before winning the Gold Topaz (1200m) at Swan Hill.

“He has come through his win at Swan Hill in good shape and the plan was always for this race to be his grand final for this preparation,” Freedman’s son and assistant trainer, Sam Freedman, said.

“He’s had a really good campaign to head here and he won that race at Swan Hill and didn’t get penalised any further which was nice.

Under the set weights plus penalties conditions, King Of Hastings is equal top weight with Hawker Hurricane on 60kg in the field of 14 with a 4kg spread in the handicaps.

The Creswick Stakes has been won the past two years by subsequent Group One winners Nature Strip and Gytrash.

King Of Hastings, who has won four of his 10 starts with four second placings, was set for the winter after his fifth in the Magic Millions 3YO Guineas (1400m) at the Gold Coast in January.

Freedman said they felt the gelding would be well-placed during this period because he could handle give in tracks and was probably just below the top-line three-year-olds and good open sprinters.

“He handles all tracks, all goings, and he runs an honest race every time he goes around.

“He’ll front up in really good order and the straight doesn’t pose an issue for him.

“He’s probably the best-credentialed horse in the race and has the best formlines so he’s probably a deserving favourite.

“It’s a pretty open race and it will be interesting to see which part of the straight is the better going but he’s drawn pretty well in the middle and Craig Williams can make a decision depending on how the track is playing.”

Williams, who is leading this year’s Melbourne jockeys premiership as he chases his ninth title, has won the Creswick Stakes three of the past five years.