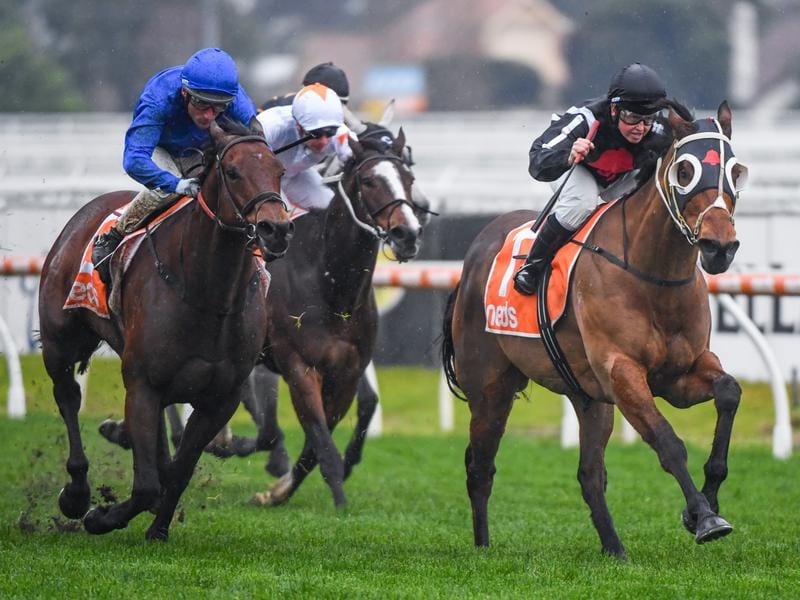 Mudlark Jungle Edge (right) has posted the 19th win of his career in the Sir John Monash Stakes.

Trainer Mick Bell says he is in awe of stable star Jungle Edge after the sprinter revelled in the heavy conditions to win the Sir John Monash Stakes at Caulfield.

In holding off the Godolphin-owned Viridine, Jungle Edge landed a sizeable betting move to run the $2.60 favourite in registering a three-quarter length victory.

And the success provided Jade Darose her second stakes race win aboard Jungle Edge after taking out the W J Adams Stakes at Caulfield in February.

Due to COVID-19 restrictions placed on jockeys, Darose was unable to travel to Adelaide when Jungle Edge won the DC McKay Stakes at Morphettville in May.

Darose has been Jungle Edge’s regular trackwork partner since Bell took over the training of the rising 10 year-old five years ago, but the WJ Adams Stakes victory was her first race ride on the gelding.

“She didn’t get a chance to ride him when he was still going through the grades and after that it made it hard to put her on,” Bell said.

“She took it on the chin but got a bit cross a couple of times when she thought I might’ve been able to put her on and didn’t.

“But it’s worked out terrific. She’s a very hard worker and she deserves all the success.”

Jungle Edge registered his 19th win from 82 starts and has earned Bell and his owners more than $1.75 million.

“I’m in awe of that horse, absolute in awe,” Bell said.

“It did look like he would go very well today, but they’ve still got to go out and do it.

“I think there will be hundreds of people tonight buying takeaway courtesy of Jungle Edge.

“He’ll be doing his bit for the economy, just like he has done a fair bit for my economy.”

Bell said the weather would determine if Jungle Edge returns to Caulfield in a fortnight to avenge his defeat in the Bletchingly Stakes at the hands of Scales Of Justice last year.

“You can’t order the weather so we’ll see how he pulls up and if it’s a heavy track then we will probably run,” he said.