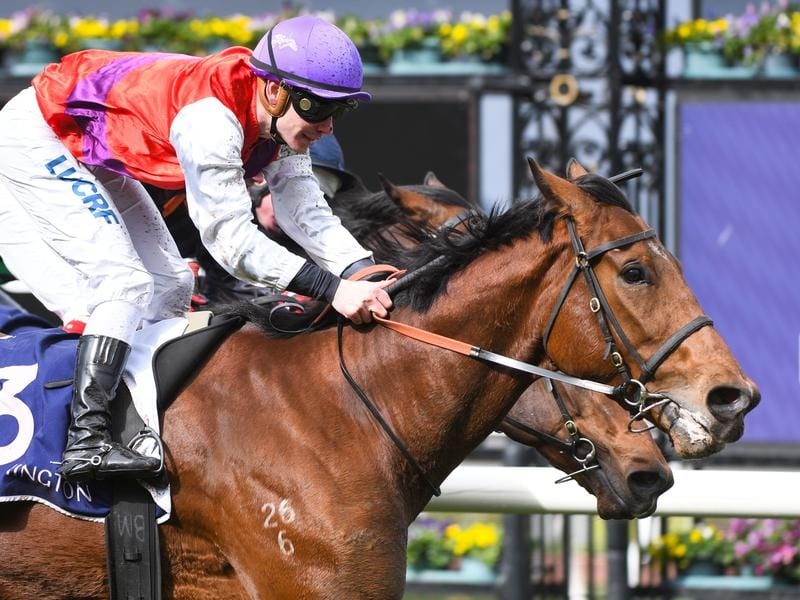 The Anthony Freedman-trained Heirborn remains unbeaten after winning at Flemington.

Spring plans are still to be decided for promising three-year-old Heirborn who has remained unbeaten from two starts with a hard-fought victory at Flemington.

The Anthony Freedman-trained gelding raced to a convincing win in a 1300m maiden on debut at Bendigo late last month before getting home by a head in Saturday’s VRC Member Helen Saffin Handicap (1400m).

Freedman’s son and assistant trainer, Sam Freedman, said they would see how Heirborn comes through Saturday’s win before his father maps out the next steps for the gelding, who he believes is already looking for 1600m and will continue to improve with time.

“As we’ve said all along, we’re just taking him run by run and he’s really looking for further now,” Freedman said.

“He’s still got a Caulfield Guineas nomination so that’s an option. It’s good to get some prize money in the bank so now if we choose to go on with him he can get into some of those races.”

Freedman said Heirborn had always shown ability and possesses a great attitude but had taken time to mature and still needs to fill into his frame.

Heirborn settled back in the field, wide with cover before jockey Ben Melham opted to get moving on him around the field approaching the home turn.

It proved the right move, with Heirborn, the $3.80 favourite, edging out Antagoniser ($21) by a head while Vegas Knight ($6.50) flashed home to finish another short half-head away third.

“I was mindful of the head breeze but if I had sat back and waited I wouldn’t have picked them up,” Melham said.

“I had to get him out and wind him up early into the breeze, knowing he probably had a little bit on them but it worked out.

“With a more genuine tempo he would have looked more impressive.”