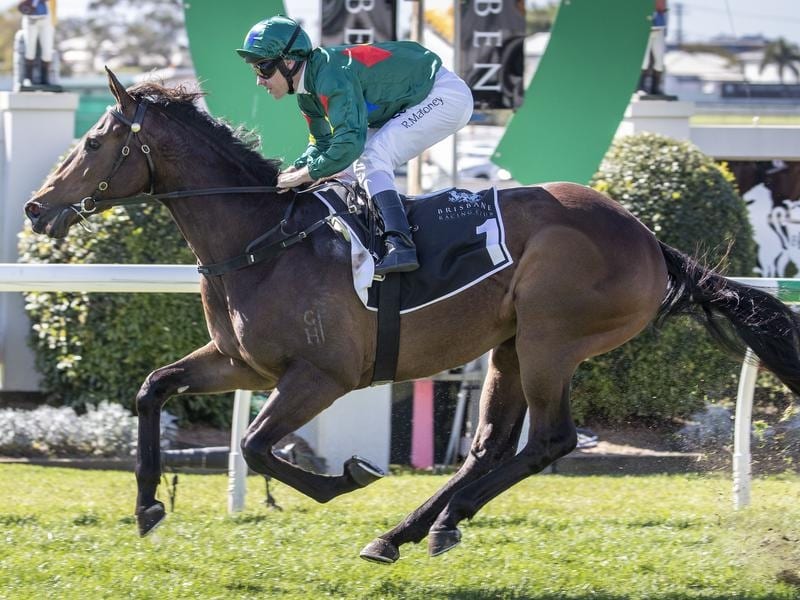 Alligator Blood has underlined his promise to make it three wins from as many starts.

Caloundra trainer David Vandyke had a warning for his spring carnival rivals after his unbeaten gelding Alligator Blood scored a runaway win at Doomben.

Alligator Blood ($4.20) made it three wins from three starts when he raced away to beat Scathing ($4) by three lengths in the AQWA Construction Handicap (1200m).

Vandyke has Alligator Blood entered for the big races in Sydney and Melbourne during the spring carnival and he has no doubt he is up to the grade.

“He is like a big dog as he wants to play all the time. When he hit the lead today I was hoping it wasn’t too soon as he was just as likely to want to play,” Vandyke said.

“We are pretty excited with what we have here. Once he matures I think you will really see something.

“He is entered for races like the Golden Rose in Sydney and Caulfield Guineas in Melbourne.

“Alligator Blood will probably have one more run in Queensland before heading south but I want to have a good look at the various calendars before making a final decision.”

Alligator Blood won his first two starts in the summer but missed both the autumn and winter carnivals with a hock problem.

“We were able to give him a good break and that should turn out to be a major benefit,” Vandyke added.