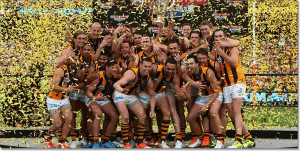 HAWTHORN have gone and done what every non-Hawks follower feared, romping past West Coast on Saturday afternoon to claim a third consecutive AFL Premiership.

The star of the show was Cyril Rioli, who was awarded the 2015 Norm Smith Medal after a livewire display which featured two goals, four assists and 12 marks.

The Eagles struck the first blow of the day, with Luke Shuey slotting the opening goal as Nic Naitanui dominated the early exchanges.

But it was a short-lived lead for Adam Simpson’s men, who never fully recovered from an opening quarter in which they managed only 1.5.11 against the Hawks’ rather more clinical 5.0.30.

And it would only get worse as Hawthorn’s precision and pressure made mince meat of West Coast’s so-called ‘web’ defence in the second term.

The margin blew out to as much as 44 points before a couple of late goals – including a clutch Elliot Yeo shot after the siren – brought it back to 31 at half time.

The Eagles threatened to blast back into the contest when they scored the first goal after the main break, but the Hawks turned it up a notch and kicked out to an unassailable 50-point lead at three-quarter time.

That left the last term to play out as a glorified lap of honour, the scores ending 16.11.107 to 8.13.61 as Hawthorn became just the fourth VFL/AFL club to win three flags in a row.

Leading online bookmaker CrownBet has tipped Hawthorn to turn their hat-trick into a quaddie, listing them as $4 favourites to win the 2016 AFL Premiership.

Adelaide, Geelong and the Western Bulldogs (all $21) round out the major contenders, just behind back-to-back preliminary finalists North Melbourne ($15).

Every grand final has winners and losers, but some folks may win or lose a little bit bigger than others. Here are our tops and flops from AFL Grand Final 2015.

For Luke Hodge, Sam Mitchell, Grant Birchall, Jordan Lewis, Jarryd Roughead and Cyril Rioli, this was more than a three-peat.

As the last surviving members of the 2008 side which upset Geelong, those six outstanding servants have now taken part in four Hawthorn flags.

And there’s Alastair Clarkson, of course, who joins Hawks greats Allan Jeans and David Parkin on an elite list of only 12 men who have coached four or more VFL/AFL premierships.

After he was omitted for the 2014 AFL Grand Final, many thought ‘Schoey’ would have to go elsewhere to get his chance on the big stage.

Some thought he may be the unlucky man once again, especially with Jack Gunston returning from injury, but the versatile tall kept his place and turned in a career-best performance with 21 touches, a goal and a big hanger on centre wing.

The deafening roar when Schoenmakers collected his Premiership medal at long last said it all.

With two of the game’s most star-studded forward lines in action, you would think one of those big names at either end might nab the first major.

But it was not to be, as Shuey – a capable goal-getter from midfield, to be sure – put West Coast ahead before the likes of Kennedy, Breust, Gunston, Roughead and Darling could really get their hands on the footy.

The 25-year-old Eagles star was paying $26 in the first goalscorer market at Sportsbet.com – very handy money for anyone who tipped it.

Much of West Coast’s rise to prominence in 2015 has been attributed to their high-pressing play off the ball – a.k.a. ‘the web’.

But Hawthorn tore through the Eagles’ much-vaunted defensive setup on Saturday, piercing the lines with power and precision to exploit the acres of space in behind.

Coach Simpson and the West Coast brains trust may have a little work to do there if they aim to go one better next year.

The 2015 Coleman Medal winner came into this clash as the most highly fancied key forward in the game.

He has left it humbled and embarrassed after a display in which he managed just nine disposals (most of which came in dead time in the last quarter) and didn’t boot a single goal.

Much of the credit must go to Hawks stopper James Frawley, who had Kennedy’s measure from start to finish and was rightly among the top three in the Norm Smith voting.

Anyone who backed Kennedy for anything

We’d hate to keep ragging on the big fella, but he really did let a lot of folks down on Saturday arvo.

Punters would be particularly annoyed, as Kennedy was heavily backed in all the major AFL Grand Final goalscoring markets.

He was also a popular value bet for the Norm Smith Medal, but we wouldn’t be surprised if the judges had him pegged as worst on ground in the end.