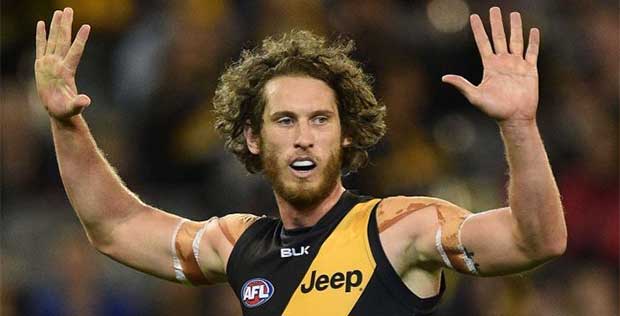 HAWTHORN’S busy start to this year’s trade period has seen Sportsbet.com.au move the 2015 premiers into $8 in the 2017 premiership betting market.

The Hawks were $10 on the weekend for the 2017 flag, but after confirmation former Tiger Ty Vickery will join the club as a free agent and public declaration that star Swan Tom Mitchell is keen to play at the club next season, a flood of money has come in for the brown and gold.

Two ambitious Sportsbet customers took the $9 odds on offer early on Monday, placing $1,100 and $1000 respectively on the Hawks to win their fourth premiership in five years.

The Hawks are now the second best-backed team – behind 2016 grand finalist Sydney ($6.50) – at Sportsbet.com.au to win next year’s flag.

The GWS Giants and the Western Bulldogs remain locked at the head of the market at the $5 quote.

The news has been so positive for the Hawks it is easy to forget prodigious Sun Jaeger O’Meara nominated Hawthorn as his destination club almost a month ago.

The prospective acquisitions as well as Hawthorn coach Alistair Clarkson’s proclamation that this year was merely an aberration has clearly made a big impression on punters.

Another team that has seen its odds shorten for next year’s premiership is Adelaide.

The Crows were buoyed by the news that Carlton midfielder Bryce Gibbs is pushing a trade to his home state of South Australia, which gave Sportsbet no option but to move this year’s semi-finalists into fourth favourite for the flag at $7.

Adelaide is another 2016 finalist which has shortened in 2017 premiership betting following the opening day of the trade period, after Carlton’s Bryce Gibbs indicated he’d like to head home to South Australia.

Adelaide’s list manager Justin Reid confirmed on Monday that Gibbs had made his intentions clear on which South Australian club was his preference.

“Bryce and his management have spoken to the Adelaide Football Club and he’s got a strong desire to come home,” Reid said.

“But we also respect that he’s a Carlton Football Club player, he’s contracted, so we’ll leave it at that in the meantime.”

Gibbs will not be the only Blue to leave Ikon Park this trade period after dashing defender Zach Tuohy alerted the club that he would seek a trade to Geelong.

The trades will leave Carlton without two of their top tier talents, and Sportsbet believe their absence will leave a huge void in the Blues’ 2017 ambitions, moving them to the second last line of premiership betting at $81.