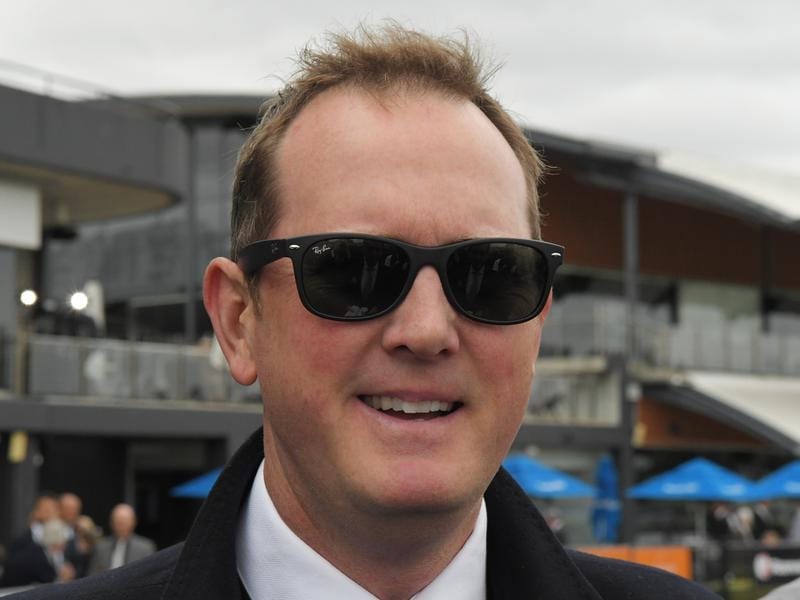 Promising Hawkes Racing four-year-old Rock has booked his spot in the Group One Epsom Handicap with a stunning victory in the Cameron Handicap at Newcastle.

The race did not go to plan early with Tommy Berry forced to settle the horse towards the rear from a wide draw but once he balanced up in the straight, Rock ($3 fav) unleashed a brilliant turn of foot to reel in the leaders and fight off the challenge from Articus ($15) by a length.

Nettoyer ($19) flashed home to grab third another three-quarters of a length away.

Co-trainer Michael Hawkes confirmed Rock would progress to the $1 million Epsom Handicap (1600m) at Randwick on October 5 when he will carry just 50kg.

“He’s a good horse in the making and he’s got a date in the Epsom now,” Hawkes said.

“The way it panned out early, he had no speed and he probably had to go back further than what we anticipated but to Tommy’s credit he got him in a nice rhythm and got him going on the corner.

“He’s just got that explosive turn of foot.

“They got away with some early sectionals and it was going to be hard to chase the leaders down. It’s taken a good horse to do it.”

Rock’s win in Friday’s 1500 metre Group Three feature was his fourth from eight starts and his first at stakes level.

Berry has no doubt the progressive gelding can be competitive in the Epsom and potentially deliver Hawkes Racing another major Randwick mile after they won the Doncaster with Brutal.

“Full credit to this guy, he had the toughest run and he was the best horse,” Berry said.

“They’re very passionate trainers and it annoys me sometimes because you know how good these horses are and it’s like ‘let’s give them one more run’ but they tip them out and give them time and now they’re starting to reap the rewards.

“This race has been a great lead-up to the Epsom every year. He’ll get in with a light weight now and I’m sure he’ll be a great chance.”

The last Cameron Handicap winner to figure in the Epsom placings was Hooked who was third to He’s Your Man in 2014.

Articus was brave in defeat after travelling wide throughout and trainer Kris Lees said he would look for a similar race for the in-form gelding.

“I’ll keep him around this trip but he probably prefers a gap between races so he’s run well,” Lees said.

Kaonic was an eye-catching fourth after settling last and having to weave a passage through the field.