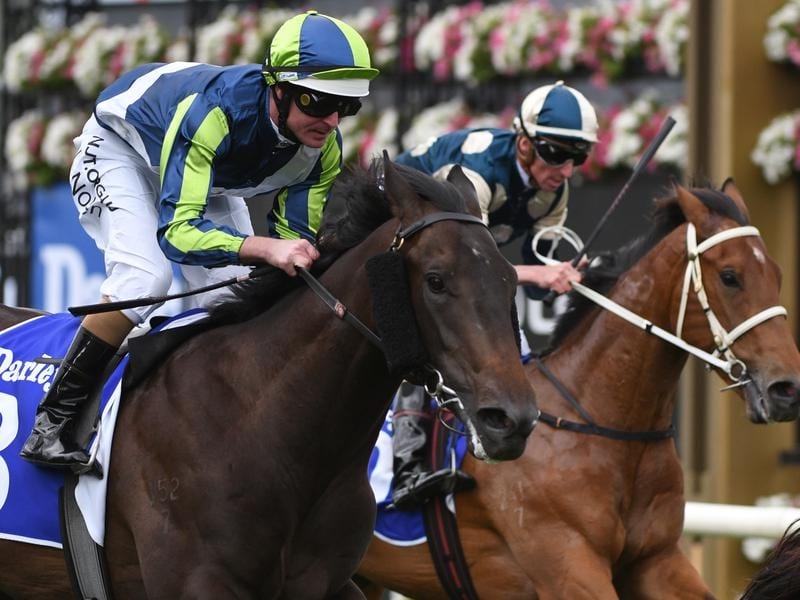 Hard Landing will bid to get his career back on track after illness cut short his juvenile season.

Lindsay Park had plans to tackle the major two-year-old races with Hard Landing but a severe respiratory complaint put an end to those after one autumn start.

Following a heavy dose of antibiotics and a good spell, Hard Landing is ready for his return in the Jockey Celebration Day Handicap at The Valley on Saturday.

Co-trainer Tom Dabernig said Hard Landing was not showing any signs of respiratory discomfort and he anticipates the colt, who turns three on Saturday, to run a forward race.

Hard Landing won the Maribyrnong Plate at Flemington on debut and was expected to put his hand up for the major autumn two-year-old races.

However, his comeback performance at Caulfield in a Blue Diamond Prelude showed the Lindsay Park team all was not well.

“We were surprised at how quickly he stopped, but in the days after we were quickly forgiving of it as he got quite sick,” Dabernig said.

“So we had to put him on a heavy course of antibiotics and turn him out for a spell.

“In the more modern era, antibiotics are not as bad as they once were. I remember my grandfather (Colin Hayes) was always wary of giving big doses.

“It can, in certain horses, upset the balance of the gut but if you can get them out on green grass and get their heads down, that seems to help the stomach and help with those respiratory issues as well.

“He looks all healthy and well and his recovery after work seems normal.”

Hard Landing spelled before the weather became too cold and has been working well in preparation for his return.

Dabernig holds some concerns over the 1000 metre journey at The Valley but reasons it will give Hard Landing experience at the track ahead of a potential start in the McKenzie Stakes on August 22.

“The Vain (at Caulfield) is there as well if he goes alright, but all we want is a nice race where he is competitive,” Dabernig said.

“It would be great if he wins but if he runs a nice top-three then we will be happy moving forward.

“He’s a very well-bred horse and we’ll be intrigued to see how he comes back. Hopefully this will tell us where we are heading into the spring.”