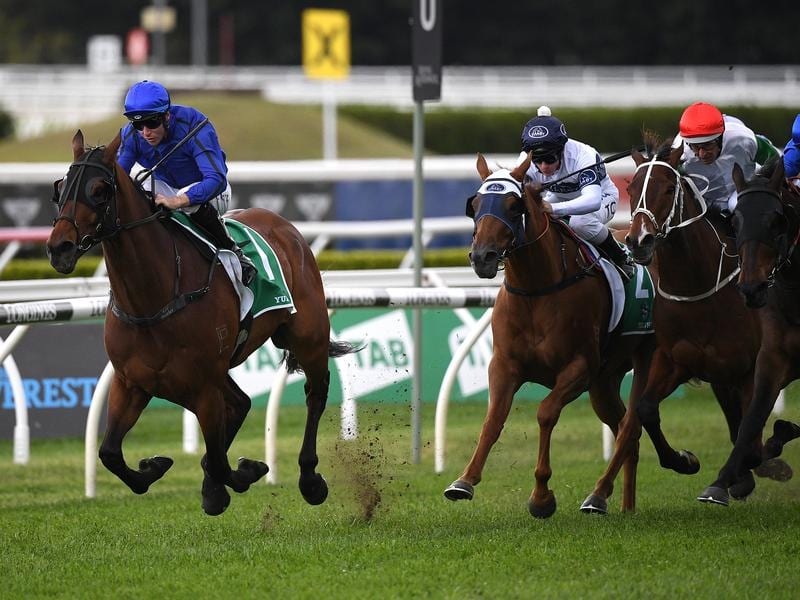 Happy Clapper (l) runs in the Apollo as he tries to pick up where he left off with a Randwick win.

Perennial fan favourite Happy Clapper heads the entries for the Apollo Stakes, the race that traditionally sets the tone for the Sydney autumn carnival.

Trainer Pat Webster is mindful Happy Clapper is coming to the end of his career but has been pleased with the nine-year-old over the past few weeks leading into his first autumn campaign without having to race Winx.

There is plenty of opposition though and Webster is also concerned about the possibility of a wet Randwick track.

“He will run,” Webster said. “I’m not keen on him having a hard run first-up in the wet but he has to start in the Apollo because it fits in with his program going ahead to the Chipping Norton.

“He is fit and well and his two trials have been good so I think he’s ready to go.”

Happy Clapper has worked home well to finish midfield in two barrier trials under Tommy Berry who rode him to win the Group Three Craven Stakes at his most recent start in October.

The gelding has usually begun his autumn campaign a little later in the Canterbury Stakes but did run in last year’s Apollo, finishing 2-1/4 lengths second to Winx.

Webster has often said when Happy Clapper is finishes racing, he will too but the trainer has some business to take care of first.

“I’ve just taken on an apprentice, Brandon Griffiths, so I guess retirement is off for the moment,” he said.

“He is a good rider and I’m keen to see him up and going well.

“He was at Hawkesbury but he has moved to Randwick to give it a go in town and I want to help him do that.”