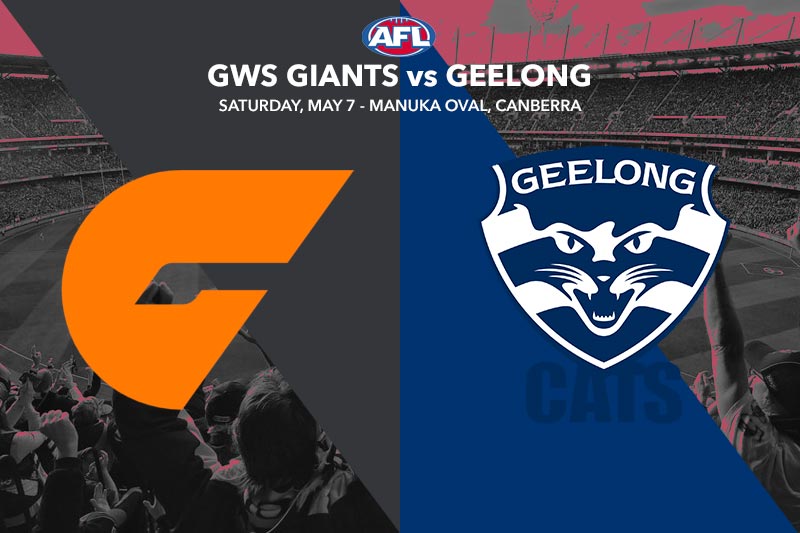 The underperforming GWS Giants will have a shot at redemption this Saturday as they host the Geelong Cats at Manuka Oval in round eight of the 2022 AFL season.

Chris Scott’s Cats blew away the Giants in last year’s semi-final at Optus Stadium, as a five-goal haul from Tom Hawkins led them to a 45-point victory.

Leon Cameron’s Giants are not performing their best so far this year, having only won two matches – against Adelaide and Gold Coast.

The pressure is starting to build on the newest expansion team, with many pundits expecting Cameron to be out of the job if he cannot reignite their season.

Patrick Dangerfield has missed the last few matches with a calf injury, but the 2016 Brownlow Medal winner is expected to make his return this weekend, replacing Max Holmes following his recent ankle surgery.

There are no major changes for the home side, but a few of the Giants’ star players are starting to recapture their best form.

We think the small forwards are going to play a huge part in this clash, and who better to lead the way for the Giants than Toby Greene. Greene was electric in his second game of the season last week, kicking four goals against the Crows in a dominant display.

Tyson Stengle is not on the same level as Greene, but he has been very influential for the Cats in their wins so far this year. The former Tiger and Crow has kicked nine goals in the last four weeks, including two outings with three majors.

You can expect both Greene and Stengle to be in the limelight this Saturday.

The midfield group Leon Cameron has at his disposal is very strong, especially now that Lachie Whitfield is starting to warm up again and Finn Callaghan is assimilating into senior football. Sam Taylor and Lachie Keeffe will be tasked with stopping Tom Hawkins and Jeremy Cameron, and if they can keep the pair quiet, the Giants will claim an upset victory.

Tom Green has grown into a powerful bash-and-crash operator in the midfield, and his growth has allowed Callan Ward to find more footy on the outside and get through games easier. Ward has been a battering ram for years, but this season has been one of his best in a new role. The former Bulldog is averaging 23 touches per game this year and should eclipse the 25-disposal mark this weekend.

We like the Giants as an upset given their deep midfield and the combination of Toby Greene and Jesse Hogan up forward. Callan Ward will lead the troops in the midfield and hit the 25-disposal mark, while Tyson Stengle will keep his excellent goalkicking form rolling another week.