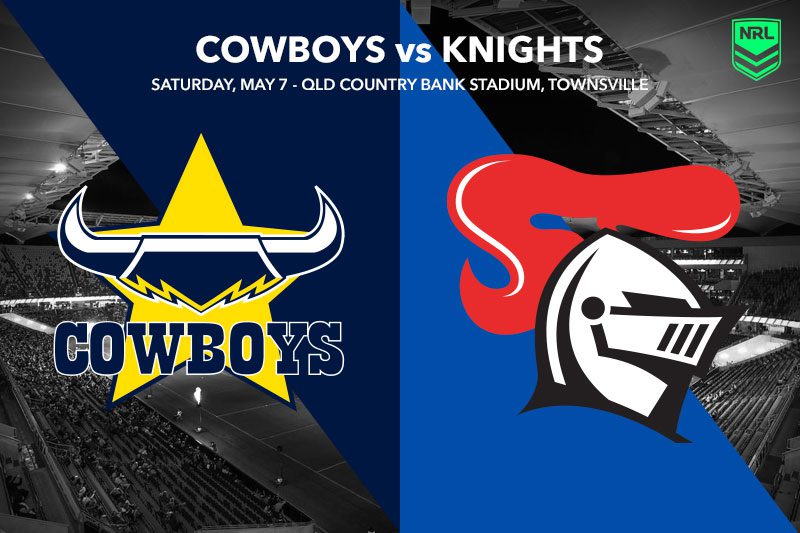 The North Queensland Cowboys will be out to solidify their place in the NRL’s top four when they take on the Newcastle Knights at Queensland Country Bank Stadium in Round 9.

The Knights haven’t won in Townsville since 2015 and will need to produce something spectacular to reverse their horrible form over the last six weeks, capped off by a 50-2 home thumping at the hands of the Melbourne Storm.

The Cowboys have exceeded the expectations of many pundits this season and they’ve done it with continuity and consistency.

They’ve had little disruptions to their side and it’s allowed them to build combinations defensively, an area where they’ve improved dramatically.

After eight games they’ve only conceded 97 points, and the last team to miss the finals when they had conceded less than 100 points in the opening third of the season was the 2010 Melbourne Storm.

That Storm team were unable to compete for competition points that year, so we should get used to the idea that the Cowboys are indeed a Finals team in 2022.

While their defence has been stellar, the re-call of Scott Drinkwater to play fullback when Hamiso Tabuai-Fidow was injured has ignited their attack.

Drinkwater is a much more polished ball player than ‘The Hammer’ and it makes their backline a real handful once they get a roll on.

Each week he is a great anytime tryscorer option because of his touch football style skills to pass, kick and run.

Add to that the rapid improvement of Tom Dearden at five-eighth and they have a spine that is running on all cylinders.

Kyle Feldt was the beneficiary of the spine play last weekend, and this week we think Valentine Holmes could cross the stripe. The Knights right edge was abysmal last week and they’ll go straight back to it.

This match-up has treated them well in recent times, with both of Adam O’Brien’s visits to Townsville ending in 13+ losses, so it brings the $1.77 price for that market into the frame.

What can we say about Newcastle this season?

Their body language in their 50-2 loss stunk and to have consecutive home games without scoring a try makes it impossible to back them.

In 2020 the Knights overcame a huge injury toll to finish with an 11-8-1 regular-season record.

Both the 2021 and 2022 seasons have been similarly plagued, and this year feels like they can’t overcome the carnage.

Chaos is running through the joint and going to Townsville to play with a new halves combination that strikes fear in to absolutely nobody is hardly a recipe for success.

There is a slight chance that Kalyn Ponga could make a switch to the number six jersey, but don’t expect that announcement until final teams come in an hour before kickoff.

If Ponga does make the positional switch, the $3.30 for him to score a try is going to be hard to ignore. It will force him to get his hands on the ball, which the Knights have struggled immensely to create space for him in the last few weeks.

If the Knights were to win this game, it would genuinely be one of the more shocking results of recent seasons.

The two fullbacks are excitement machines. Scott Drinkwater’s highlight package in the last few seasons is as good as anyone’s in the NRL. Having him at fullback accentuates the positives in his game and removes the huge flaw, which is his defending in the front line.

Kalyn Ponga returning to the city he used to call home as the captain of the Knights has to fire him up, and even as poor as the Knights have been, he has still managed to have one or two touches in each game that leave you salivating at what he could be if the team around him could get their act together.

Fans should just sit back on Saturday evening and watch two great attacking fullbacks duke it out.

The Knights will lose by another big margin. You can’t have a new halves combination, who are limited at best, come into the side and expect a win first up. The Cowboys are winning at the 13+ margin.

The Cowboys at the big margin with Valentine Holmes and Tom Gilbert to score tries at anytime pays $9.93 with Ladbrokes.