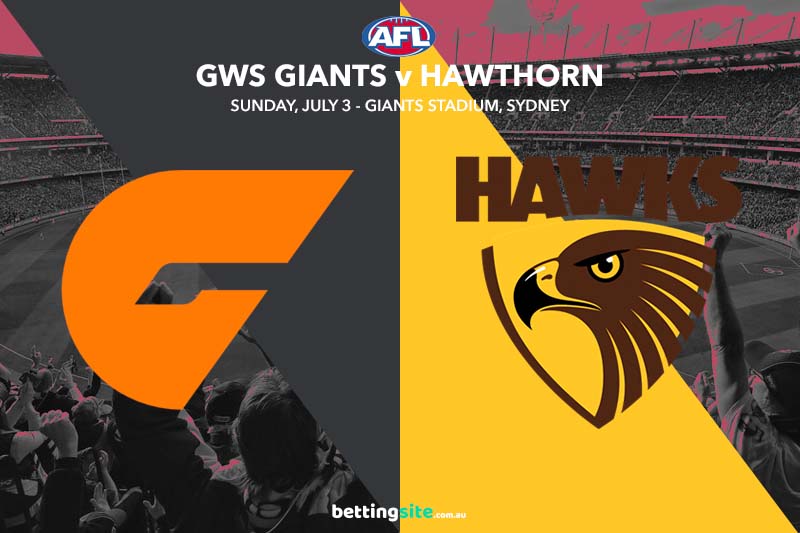 One of the best matches round 16 of the 2022 AFL season has to offer will see the GWS Giants host the Hawthorn Hawks, as the two up-and-coming squads face off at Giants Stadium this Sunday.

Although the GWS Giants and Hawks sit 14th and 15th respectively on the AFL ladder, they are still two of the more dangerous teams that can go toe-to-toe with a top side on their good days.

The two teams only have four wins so far this season, but you can see the Hawks are going in the right direction, whilst the Giants are in an interesting position as they wait and see who takes over as their new head coach at the end of the season.

Mark McVeigh is doing a fantastic job as interim head coach of the Giants, as he has revitalised their older players and is making effective positional changes across the entire ground.

Will Day and Jack Gunston will make an important return for the Hawks this week as they slowly return to full strength, whilst the Giants will bring back Matt Flynn as their preferred ruckman over Brayden Preuss.

The Hawthorn Hawks took home the chocolates in last year’s clash between these sides, but they will have to do a fair bit to get over the line as underdogs this weekend.

Mark McVeigh has given Stephen Coniglio the license to return to the midfield and track down the footy at all stoppages, which has reignited the skippers career to new heights. Whether or not Leon Cameron pulled Cogs away from the midfield is unknown, but you can certainly see he is flourishing under McVeigh.

Tom Mitchell is in a contrasting position at the Hawks, as Sam Mitchell has changed his role slightly and he is finding less of the footy than ever before. Mitchell needs to use his defensive aspects against Coniglio this weekend, as the Giants leader has picked up over 30 disposals in four of his last five matches, making him a very tasty option in the disposal betting markets with the top AFL bookmakers.

With Lachie Whitfield and Stephen Coniglio beginning to wind back the clock week-by-week, we think the Giants are turning into a very difficult side to beat. Their last quarter against the Magpies in round 15 was electric, as they kicked seven goals and kept the very potent Pies to just two majors. The Giants should choke the Hawks in the front half and capitalise on turnovers, resulting in a close victory.

With Harrison Himmelberg turning into a very handy backman for the Giants, a spot inside 50 has opened up for Jake Riccardi to become a very strong forward. Having kicked multiple goals in four of his last six contests, which includes his last three consecutive matches against decent opposition. Riccardi has sticky hands and a long leg, which he uses to convert the majority of his set shots.

Stephen Coniglio and Jake Riccardi will star for the Giants on their home deck this Sunday and register a much-needed victory over the Hawks, who seem to be slowly falling away with each passing week.
GWS 1-39 / Riccardi 2+ goals / Coniglio 30+ disposals @ $12.97 with Ladbrokes