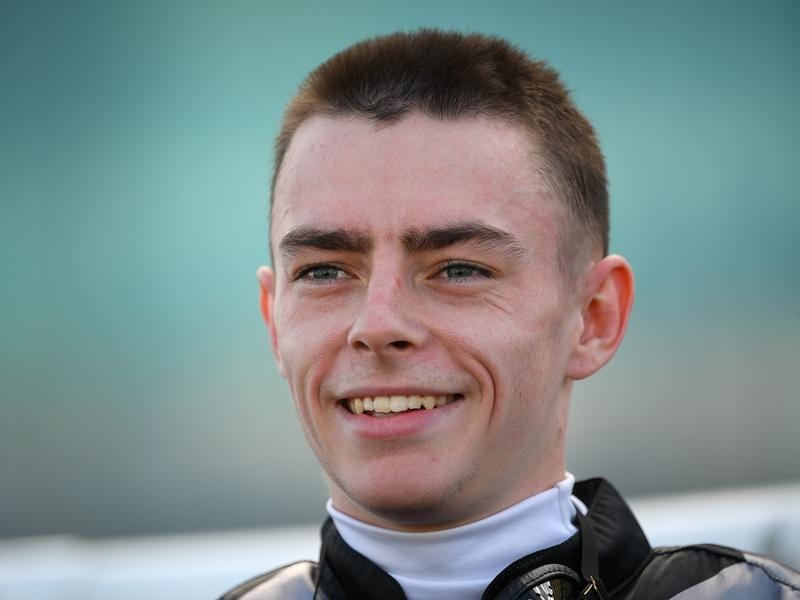 Apprentice Robbie Dolan has ridden Splintex to win the Group Two Arrowfield 3YO Sprint at Randwick.

Mark Newnham thinks so much of Splintex, he entered him in a Group One race over the autumn carnival.

That did not eventuate with the colt an emergency in The Galaxy (1100m) last month and subsequently withdrawn from a lesser race on the day.

Splintex recovered from what was a minor concern with his blood picture and on Saturday lived up to his trainer’s expectations with a narrow win in the Group Two Arrowfield Sprint.

The victory answered the question whether he could get 1200m, although it was a close-run thing with Flit getting to within a nose.

“That was terrific,” Newnham said.

“He hadn’t been and won at the 1200 yet so I had my heart in my mouth the last few strides, but he’s just a really good genuine horse and I think he has been a bit underestimated.

“Now he is a Group Two winner and he’s still a colt.”

His victory brought up the century of stakes winners for his sire Snitzel who stands at Arrowfield Stud.

After opening at $26 early in the weeks, Splintex started at $9.50 while Godolphin’s Flit was at $7.

Favourite Cosmic Force ($3) ran seventh after finishing out of the placings as The Galaxy favourite.

Owned by Geoff and Mary Grimish, Splintex was ridden by Newnham’s champion Sydney apprentice Robbie Dolan who admitted he was uncertain he had got the decision.

“I have ridden him since he was a very young horse and I have always believed in him along the way,” Dolan said.

“It’s just unbelievable to ride him in a big race like this today, and then to win it is a fairytale.

“Flit is very long. That is one thing I noticed just after the line, I thought gee she is longer than I am, but thankfully my fella just stuck his nose out in the right spot.”

Dolan said his family at home in Ireland would be watching, particularly with racing shut down in Europe because of the COVID-19 pandemic.

Australia is one of the few countries still racing.

“My Dad gets up all hours of the morning to watch the Australian racing,” he said.

“He knows all the horses and all the jockeys, probably more than the Irish racing at the moment, and this one is for the family back home.”