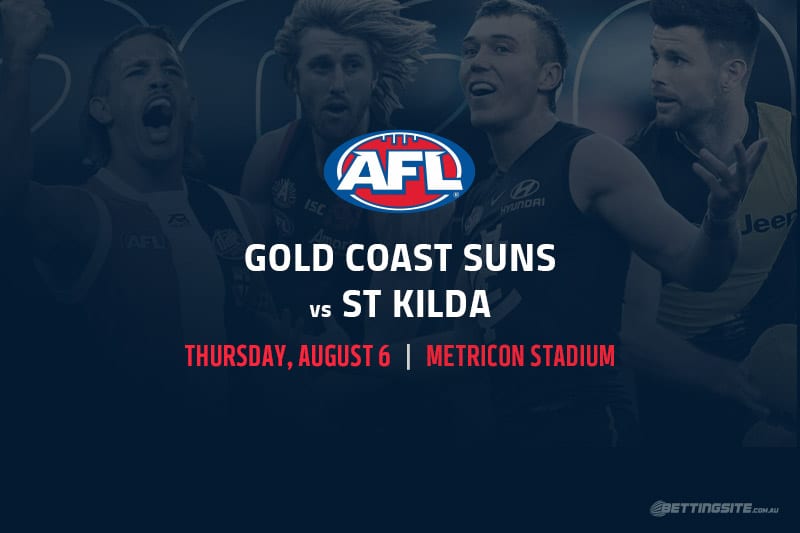 One of the most exciting new rivalries in the AFL will reignite on Thursday when the Gold Coast Suns host the St Kilda Saints at Metricon Stadium.

These teams faced each other twice in 2019, with the Saints winning the first clash by a point and edging the second by four points.

They also played out a thriller in 2018, when Jade Gresham kicked a last-minute miracle goal to give St Kilda a two-point win.

The King twins will face off for the first time ever in the AFL arena this week, with Ben at full forward for the Suns and Max leading the way for the Saints.

Although St Kilda sits fourth on the ladder and Gold Coast is 11th, only two wins separate them as they look to break their lengthy finals droughts.

The Saints have not finished in the top eight since 2011, when the Suns played the first of their nine AFL seasons without reaching the postseason.

We are already past the halfway mark of the 2020 campaign, so time is running out for Stuart Dew’s men to stake a finals claim at long last.

Jarrod Harbrow has been a key figure in the back half for Gold Coast since his move from the Western Bulldogs in 2011, using his vast experience to guide the young Suns in the right direction. Harbrow can still be a threatening presence when rebounding from his defensive 50, as his trusty left boot allows him to create plays. Harbrow averages 22 touches against the Saints in his last four matches, while his recent form has been promising.

If you look back at the best matches from Jack Billings in the past few years, you would notice he has been unstoppable against the Suns. After opening the 2019 season with 28 disposals in round one, Billings also collected 33 disposals and kicked two goals against Gold Coast in their second clash of the year. That’s enough for us to throw a few bucks behind the talented St Kilda midfielder in the 25+ disposals market.

We highlighted the twins earlier in the piece, but now we will explain why they will lead the way in front of goal. Ben King is currently the leading scorer for the Suns with 13 goals in his nine matches. It is the 202cm forward’s athleticism and agility that will allow him to kick goals against the likes of Dougal Howard and Jake Carlisle, who are excellent defenders that give up an inch or two on King.

Max has one more goal than Ben this season, but the competitive nature of the brothers will turn this match into a shootout. Max is clearly going to be a problem for the Suns, as he regularly dominated Jack Lukosius when they battled in the Under 18 Championships before they were drafted. King has kicked multiples in five of his nine games this year, and we think he will improve that record this week.

Scoring has been easy for the Saints, who average the most points per game this season, but the Suns have also been strong in this area. Whenever Gold Coast plays at Metricon Stadium, you have to consider taking the overs. We have boosted our odds with an alternative line as we expect this game to turn into a shootout.

We cannot deny the Saints’ current form, as they recently beat the Crows, Power and Swans, but the Suns will want to get revenge after two years of falling just short. Watch out for Izak Rankine in the forward half for Gold Coast, as St Kilda has struggled at times against unpredictable players.